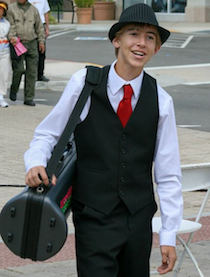 You don’t think of it, but it can be a stigma to play in a jazz band in high school, to be a young jazz musician. The other day in the central quad at Liberty High School, for example, the jazz band was giving an outdoor performance and kids began to boo and throw things.

Liberty High is 102 years old, out in the Delta, in Brentwood, a town of 52,000, on an alluvial plain where peach orchards have given way to wineries, gated communities, and golf courses. The biggest employer is the school district. Thirty percent of the population is 18 and under. The chances of becoming a violent crime victim are 1 in 429.

“We’re known as band geeks,” Robbie Henderson told us. He’s a 17-year-old senior at Liberty. “It’s a stereotype. People think of American Pie: band people as satanic. We’re always near the bottom of the hierarchy.”

In other hierarchies, Robbie Henderson plays with the San Francisco Jazz All Stars. He was selected for the Contra Costa County High School Honor Band and plays in a select ensemble at his school. He’s in his second year as a member of the Diablo Wind Symphony.

All this began at the age of two when he was drawn to a slide whistle. At 10, he tried out for the trombone. The teacher said he was a natural, at bass trombone no less. The very fact that he could handle the slide was particularly unusual because kids that age usually don’t have arms long enough.

Henderson has always been tall for his age; his father, the fire chief of East Contra Costa County, is 6’4”.

These days Henderson’s world is beginning to unfurl. As his mother puts it, he’s starting to be ‘marketable’. A lot of bands are looking for a bass trombone. He just got back from New York playing with the All Stars in the Mingus Jazz Festival; this coming weekend he's playing in the Nextgenjazz Festival in Monterey.

Still, things don’t always come his way. He wanted to study music at the University of the Pacific, but couldn’t get in. He tried for St. Mary’s but got rejected. Nevertheless, he got into Sonoma State, CSU Monterey, and CSU East Bay. He will be the first in his family to go to college.

No, it hasn’t all been easy; he’s had to struggle. Asked what advice he would give others who have Asperger’s Syndrome, he replied, “I like to say what I’ve been taught: Autism is not a disability it’s an ability. I tell people, the best thing is to find someone who can motivate you and then don’t ever lose sight of who you are as a person. Now some people might interpret that as arrogant and cocky. But don’t worry. Pursue your passion; don’t worry about your fears: Fear is just weakness leaving the body. ”

Incidentally, Henderson is also a competition skateboarder. That’s his release from endless practice, even from the feeling of ecstasy when he’s in the zone, when he’s lost from reality, when all he knows of the world is a melody and some chords.

But on his board, everything is pushed back. He’s in another mid-air, doing ollies and aerials with his ear buds full of Mingus playing Duke Ellington’s Sound of Love.