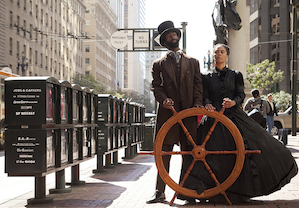 Another free public event this week is a site-specific performance work inspired by San Francisco’s early African American settlers. Joanna Haigood's Zaccho Dance Theatre presents Sailing Away in three continuous cycles, Sept. 13, 14, 15, and 16; at noon, 1:30 p.m., and 3 p.m.; starting at Market Street and Powell. It's all open to the public.

The "San Francisco Exodus of 1858" is a little-known part of the city’s history: Hundreds of African Americans fled discrimination and the threat of slavery for the safety of a Canadian exile.

Market Street will provide the backdrop as performers interpret historical narratives through a series of vignettes and activities, incorporating sites and monuments located between Powell and Battery streets, pausing at such spots as the Mechanics Monument and Admission Day Monument.

"It’s ironic that a city now celebrated for its diversity once saw hundreds of its citizens flee in fear for their lives," says Haigood. 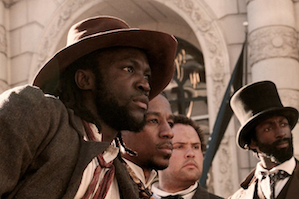 In the mid-19th century, Market Street was home to a burgeoning black middle class, but Peter Hardeman Burnett, California’s first governor (1849-1851), pushed for the exclusion of freed slaves from the entire state. Although a black exclusion bill never passed in California, it reflected strong public opinion within the state, which eventually led to the passage of other discriminatory bills against blacks as well as Chinese, Mexicans, and Native Americans. By 1858, because of increasing discrimination, some 800 African Americans sailed for British Columbia aboard the steamer Commodore to escape growing hostility.

Sailing Away depicts eight prominent African Americans who lived and worked near Market Street. During each performance, newspapers containing historical information that is referenced in the work (maps, biographies, and significant events) will be distributed to the viewing public.

Haigood says that since 1958, there have been "two notable waves of black ‘out migration.’ The first occurred during the redevelopment of the Fillmore district in the 1950s and 1960s. The second is currently underway." The city's African American population has declined by 40.8 percent since 1990.

Sailing Away activities will also be presented in the Bayview Opera House and at the California Historical Society.