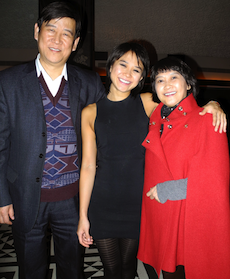 The orchestra's Asian tour will soon end in Japan, but last weekend, it was time for Shanghai and the San Fracnisco Symphony debut in Beijing. In Shanghai, several musicians conducted master classes at the conservatory in addition to performance and sightseeing, then it was time for the capital. SFS Public Relations Director Oliver Theil writes:

Aside from much international media coverage about the new regime, the timing has meant very high security measures and spotty internet connections for the usually well-connected orchestra, with much access to our usual media blocked, with severe restrictions on Facebook, Twitter, YouTube, and anything Google. Television and phone calls home that mentioned the transfer of power were mysteriously cut out.

But one thing censors and filters cannot block or, at least should not block, is great music. Chinese audiences and their enjoyment of western classical music is growing and a visible example of this commitment is the very impressive National Centre for the Performing Arts in Beijing, or as it is affectionately called, "the Egg." The building is as impressive from the outside as the inside. With its gleaming curved shell, its wide open lobbies and warm and welcoming interior, the NCPA is a stunning structure. 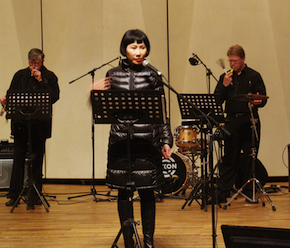 After the morning of master classses, MTT and SFS musicians took part in the Asia Society's U.S./China Forum on the Arts and Culture, aimed at cultural exchange. The concert included members of the SFS, Beijing Central Conservatory, tour soloist Yuja Wang, Chinese artists performing on traditional instruments such as the guqin and sheng, the SFS Jazz ensemble, and friend of the SFS, writer Amy Tan.

The concert itself was a triumph. Anticipation for the concert had been building steadily, the concert was sold out and in attendance were U.S. Ambassador Gary Locke and his wife Mona, China Vice Minister of Foreign Affairs Cui Tiankai, and San Francisco's First Lady, Anita Lee.

For tour soloist and Beijing native Yuja Wang, it was a homecoming, her parents in attendance at the NCPA. After the concert, SFS President John Goldman hosted a dinner for the orchestra and dignitaries in attendance near the Forbidden City.