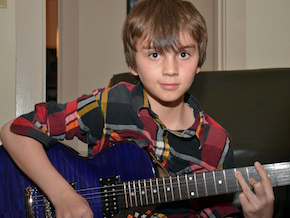 Jono Kornfeld teaches piano, theory/composition and guitar at San Francisco Community Music Center, and lectures on music theory at San Francisco State University. He also plays guitar in Hop Sauce, a funk/jazz quartet. He sent us this account of a recent recital by one of his students.

Sunday’s kids-only recital started the usual way, with parents readying their camera/video phones, little siblings fidgeting in the lap of a relative and a few of us teachers milling around, just as nervous as — if not more than — our little pupil-performers who were minutes away from taking the makeshift stage that is otherwise a waiting room during the week.

My student, Giovanni Quinn, who is 11, was second on the program. He’s been studying acoustic guitar for just a couple of years and his small fingers barely fit around the neck. This was his first recital. He loves rock and blues, so when he asked about learning The Beatles’ “Hey Jude”, I enthusiastically agreed and was even more happy when he wanted to sing it as well. That afternoon’s program was rather full, so after the first performer finished her piece, we rushed to get Gio into position.

Late-arriving families were still coming in when he started up, singing quietly and employing the finger-picking pattern we had worked out. The room came into focus as he went through the verses and refrains, singing carefully and not letting his mistakes throw him off. He switched to a louder strumming pattern for the last verse to help with the build-up. As nervous as he was working towards the end of that verse, he managed to raise his voice for the “better, better, better--yeah!” part, cracking a little smile.

Then it happened. He started-in on the last part of song, the three-chord anthemic coda that is known around the world: the “Na, na, na...Hey Jude” part. After a cycle or two someone in the audience dared to do the right thing — what all of us probably wanted to do had we not thought it improper concert etiquette — someone, a grownup voice, started to sing along! Within a couple of “na”s, all of us (and there were many) who knew the tune joined in.

A moment later, the hand-clapping on beats 2 and 4 started-up as well. Little Gio finally looked up from the guitar neck with a confused and then happy expression. “I was kind of surprised, I didn’t expect that,” Gio said afterwards. And he added, “It’s kind of fun watching people watch you.”

Still, he kept on playing, adding all the fills and extra chords we had gone over in his lessons. After the last chord and the overwhelming applause, Gio even remembered to move his music stand aside to make room for whoever was to be up next. And 60 seconds later it was someone else’s moment to light up the stage and share her accomplishments with us.

Had someone been walking by on 30th Ave. at that moment, it’s doubtful they could have heard what was going on a couple of hundred feet away, and the moment passed all too quickly anyway, or so it might have seemed. But that doesn’t matter, because tucked away in our makeshift concert hall of little performers, their parents and teachers, something happened that, as a teacher and member of CMC, I will remember always: A little kid brought to the surface and forefront of our minds a tucked-away song that most of us first heard and loved when we were just as young as him, a song we all wanted to sing along with, a song from our youth that we don’t want to forget that speaks of hope and optimism. Gio gave us that moment of sincere joy that comes from sharing music–and we sang it back to him.