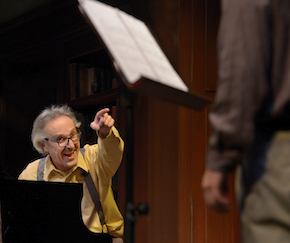 Besides boosting audience traffic to Livermore and Mountain View, I am confident in recommending Walnut Creek for rewarding cultural tourism.

The play is directed by Jessica Heidt, musical direction by Brandon Adams, and featuring a duo of outstanding actors in Dan Hiatt and Patrick Russell.

Hiatt plays an elderly, shopworn music professor in Vienna who at first clashes but later connects on a deep human and artistic level with a young American pianist, played by Russell.

Working on Schumann's Dichterliebe, teacher and student traverse the music's depth and variety — the song cycle used as a plot device, but also enriching the experience of both veteran fans and those new to the music. 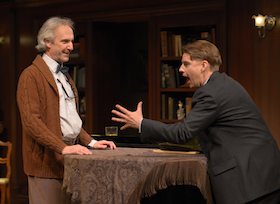 The play also has psychological/political depths, with references to the Jewish student's experience of Central European antisemitism, the professor's apparent bias (hiding a surprising secret), discussion of Kurt Waldheim's campaign for Austria's presidency, and much more.

The title of the play comes from the title of the last song in Dichterliebe, "Die alten, bösen Lieder" "bösen" meaning bad or angry, but "wicked" is acceptable in the context:

The old, wicked songs,
the dreams angry and nasty,
let us now bury them,
fetch a great coffin.