“It is never right to play ragtime fast.”

This admonition from the composer appeared on more than one of Scott Joplin’s rags, written between the time of his residence in Sedalia, Missouri, in 1895, and his untimely death at age 49 in New York City, on April 1, 1917.

It’s advisable also, in the year of the centenary of his passing, to take a slower, longer look at the life of this African-American artist, to appreciate his aspirations to overcome racial and cultural prejudice and to have his efforts taken seriously. “He’s one of the fathers of authentic American music,” says Carman Moore, co-founder of the erstwhile Society of Black Composers and contributor of a study of Joplin’s opera Treemonisha to The Complete Works of Scott Joplin (edited by Vera Brodsky Lawrence, New York Public Library, 1981).

“Ragtime went into other musical forms,” Moore points out, speaking from his New York City home. “From ragtime came jazz, it became a part of traditional gospel music, and it became an integral part of bluegrass. Joplin’s influence is enormous, it even reached Debussy and Stravinsky and who knows who all else.” 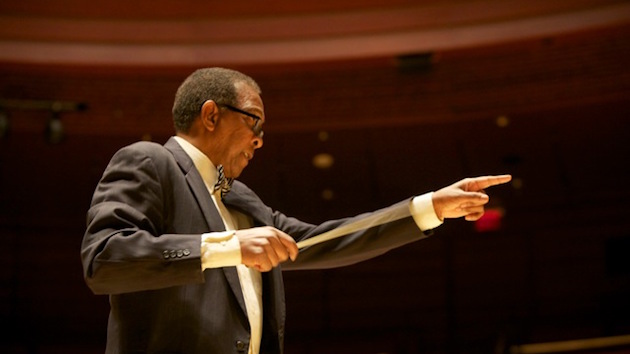 Moore, who has written his own gospel opera (Gethsemane Park, with Ishmael Reed) as well as many symphonic and choral works and pieces for jazz ensemble, learned much about his predecessor during the NYPL project. “Joplin was there in the first generation after slavery, so he was sort of the creator of the way out of slavery. What does it mean to be free? Everybody had to solve this for themselves. ‘Forty acres and a mule’ was a promise some ex-slaves got, but basically, they were on their own.” 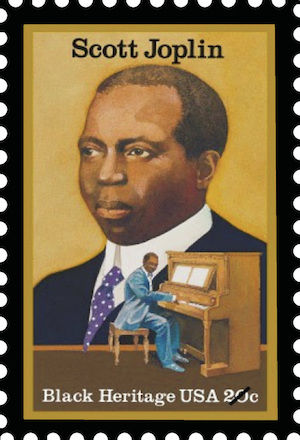 Joplin’s father, Giles, was a laborer and an ex-slave, and also a fiddler. His mother, Florence, was a domestic worker who also played banjo and sang. In the town of Texarkana, Texas, where they raised their children, Florence got permission for young Scott to practice on the piano of a white attorney while she cleaned the house. The boy took lessons with a German tutor and music teacher, Julius Weiss, who “helped shape Joplin’s aspirations and ambitions towards high artistic goals,” according to one of the composer’s few reliable biographies (King of Ragtime, by Edward A. Berlin, Oxford University Press, 1994).

“Then he went on the road, at age 14, because he and his father were on the outs,” Moore relates. “The thing about the South was, if you knew you were a marvelous musician, you would try to find some place to play where you could entertain farmers, or you’d go on the road and find places that needed someone to entertain white people.” There were also “bars and whorehouses, wherever Joplin could make some money. Early on, he just wanted to pay his bills and see what was happening in the world. He didn’t have any particular plans.”

Settling in Sedalia, a small but thriving city in central Missouri, Joplin began writing in ragtime, a form named for its “ragged” syncopation. Ragtime was at first an update of the so-called “coon songs” heard in minstrel shows, staged comic entertainments based on black racial stereotypes and performed both by whites in blackface and by blacks themselves. Throughout the 1890s, ragtime, dispersed in sales of sheet music and as player piano rolls, “got solidified into the new hit music,” says Moore, “because everyone had to have a piano, if you wanted to be looked upon well.”

Joplin sold all rights to his first few rags to publishers, without possibility of sustained financial benefit. But after his composition the Maple Leaf Rag caught the attention of John Stark, a white purveyor of instruments and sheet music eager to succeed in publishing, the two men struck up a long-term working relationship involving royalty contracts, and Maple Leaf went on to win the composer his greatest fame and financial gain. Nonetheless, “I don’t think most people knew he was black,” Moore supposes. “They would definitely not put his picture on the cover [of the sheet music]. That would have been bad for business.”

Assessing the Maple Leaf Rag’s virtues, aside from its exhilarating syncopation, Berlin notes that Joplin “had discovered the propulsive power of harmonic motion, of resolving dissonances, and of goal-directed voice-leading. The remarkable opening of the work was to change ragtime,” Berlin observes, “and the rest of the composition is equally marvelous.” 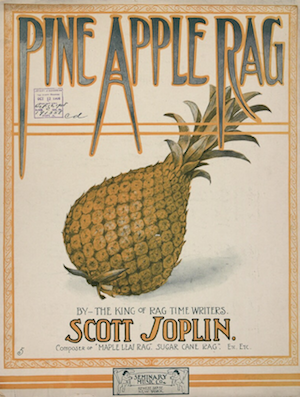 As his book of ragtime compositions expanded with such popular titles as The Entertainer, Solace, Easy Winners, and Pine Apple Rag, Joplin attracted a handful of aspiring black and white composers eager for his guidance, as well as envious (and mostly less talented) imitators. Reactions among white classical artists and critics were inevitably mixed. The conductor of the Boston Symphony Orchestra, Karl Muck, declared that ragtime “poisons the very source of your musical growth, for it poisons the taste of the young.” Moore notes that, “Edward MacDowell, who was just getting attention to American music from the classical world, was upset that anyone would think that Negro melodies had anything to do with Americanism in art.” On the other hand, it was reported in the St. Louis Globe-Democrat, in 1901, that Alfred Ernst, conductor of the St. Louis Choral Symphony, had proposed taking Joplin with him to his native Germany “with a view to educating the dignified disciples of Wagner, Liszt, Mendelssohn, and other European masters of music into an appreciation of the real American ragtime melodies.” The conductor told the newspaper that he’d personally played portions of Tannhäuser to Joplin, who “was enraptured. I could see that he comprehended and appreciated this class of music.”

Encouraged by positive feedback, Joplin took a break from ragtime to compose a first opera, A Guest of Honor, in 1903. He toured the work, but at his own expense, and it nearly depleted his accumulated earnings from Maple Leaf. Joplin relocated to New York City in 1907, where active songwriting centered on Tin Pan Alley, and bolstered his canon to 44 rags and compositions in other forms. While recordings carried his notoriety further, there was as yet no financial arrangement for the composer to benefit from this new medium. 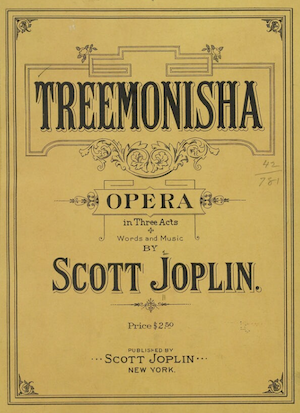 In 1910, Joplin began his second opera, Treemonisha. “It looks like it was written for a black audience, because its story, set in the bush not far from Texarkana, is a lecture about how black people could get ahead,” says Moore. “A couple finds a baby under a tree, so they call her Treemonisha. They talk a white couple into educating her, and by the time she’s 18, she’s trying to teach black people in the neighborhood. Roughnecks try to steal her away, and the good guys come in to beat these guys up, and she tells them, evil can’t conquer evil, we need to bring these people to the world of knowledge. So this opera was set in 1904 or so, and she’s already talking from a Martin Luther King place, or a Gandhi place. [Joplin] was just a very advanced intellect, and the fact that he’d been trained by a white guy made him open to the possibility that the races could get together.”

Moore is also impressed with the “wonders” found in Joplin’s score. “He has a thing called ‘Frolic of the Bears,’ set for eight bass voices. They growl! It’s like Haydn, bringing to life sounds other than just people singing. And ragtime is used as a springboard to other things. There’s recitative, there’s chromatics used to theatrical purpose, there’s a duet between Treemonisha and Remus, with a chorus of cotton pickers. The closing chorus, called ‘A Real Slow Drag,’ is just magical, with a choir.”

However, “the ability to write a text of some subtlety is not there” in Treemonisha. “He covers the words, but he should have had a librettist who could better write them. He never got a full performance while he was alive, he just had a reading, with him at the piano.” The composer himself described his opera as “strictly Negro.” But decades after his death, a trust established by Joplin’s widow commissioned a new version of the score, orchestrated by Moore’s friend William Bolcom, and a second orchestration, by Gunther Schuller, was produced by the Houston Grand Opera, recorded on Deutsche Grammophon, and moved on to Broadway. Inspired by Bolcom’s interest in Joplin’s rags, musicologist and pianist Joshua Rifkin made a hit recording of several of them for Nonesuch Records in 1970, followed four years later by more Joplin rags on the soundtrack to The Sting, performed by Marvin Hamlisch. In 1976, Joplin was awarded a special Bicentennial Pulitzer Prize for his contributions to American music. Joplin’s legacy had already been honored through live performances in the Bay Area by such “trad jazz” entertainers as Lu Watters and His Yerba Buena Jazz Band, Turk Murphy, and Max Morath.

While he appreciates these indicators of Joplin’s posthumous popularity, Moore sustains the advice offered long ago by a visiting Anton Dvořák. “In Harper’s Magazine, in 1895, [Dvořák] lectured American classical composers that the source of indigenous American music was lying there, right under their noses: in black culture and American-Indian culture.”