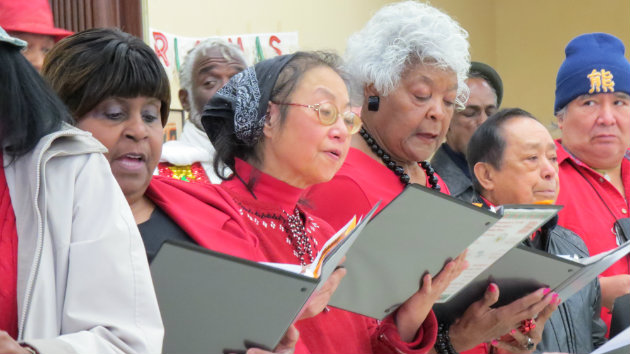 The gray light of a San Francisco winter, peering through the windows of the 30th Street Senior Center, is brightened as it reflects off the pages of music held by 42 of what the facility terms “participants.” Equally illuminating are their massed voices, singing, “On Monday, give me the gift of love!”

This is a line from “This Little Light of Mine,” a children’s gospel song, arranged for these multiethnic seniors by Jennifer Peringer, who’s accompanying this session on piano accordion. Standing beside Peringer and directing the center’s senior choir is Martha Rodriguez-Salazar, Peringer’s partner in the Bernal Hill Players. It’s a musical gift of love that is shared here every Monday morning. And it’s a gift that keeps on giving.

“There’s this belonging and feeling good about it,” testifies 66-year-old Estela Moreno, who only began singing, at the urging of her niece, after her elderly parents passed away a few years ago. She and her fellow 30th Street choristers extended their gift to an audience of friends, relatives, and other music lovers on Jan. 27 at the Herbst Theatre, in a Summit concert bringing together seven senior choirs from across the city. They were directed and accompanied by faculty from the Community Music Center (CMC), including Salazar and Peringer.

Behind all this happy activity is a purposeful, scientific study, under the aegis of UCSF cognitive neuroscientist Julene Johnson, who, perhaps not surprisingly, also possesses a degree in flute performance from Southern Methodist University. In 2012, Johnson was given a grant by the National Institute on Aging for what’s clinically described as “a cluster randomized trial of . . . choir intervention, to promote the health and well-being of diverse older adults.” 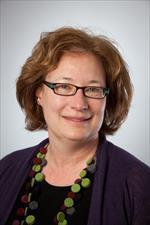 Johnson puts a human face on the five-year research project, for which funding ends a year from now. “I’m extremely excited about this study,” she says. “It’s probably the largest study in the United States ever on choral activity for older adults, and it will have impact nationally, if not internationally.”

She lays out the design of the study:

We collaborated with 12 different [San Francisco] Administration on Aging-supported senior centers to start 12 new choirs. The first was started in early 2013, at the Mission Neighborhood Center [two blocks north of the CMC]. We recruited people from around the neighborhoods: They’d be interviewed before they started choir, again after six months, and then again after one year. Half of the 12 sites started their choirs immediately, half had to wait six months to start ... and we’d compare those that started singing with those that waited and didn’t sing.

“We looked at three functions,” Johnson continues about the interview process. “One was physical function, for example, lower-body strength. We looked at cognitive health: Do those who are singing have better memory, or other cognition. And the psycho-social aspects: For example, we looked at depressive symptoms, anxieties, things like that.”

Johnson can’t comment definitively on research still in process, but Moreno, one of the 390 seniors involved in the study, can. She and the 30th Street Senior Choir joined the project in its second year. “People that have asthma reported that their asthma was much better” after singing for at least six months, says Moreno. “They also felt they didn’t feel depressed any more. They were looking forward to Monday, it gave them a purpose. Their whole week got much better.” She herself had been “pretty down for a whole summer,” after her father’s death. “Then when I started singing, the friendships are what for me helped.”

Moreno recounts the shared activity that is renewed each Monday when she enters the somewhat crowded chorus room at the 30th Street Center. “I say ‘hi’ to everybody and give them a big hug. Then Martha does breathing exercises with us.” Under the aegis of San Francisco Performances, soprano Jessica Rivera also conducted two workshops at the center on breathing for singers. “We tried to be inclusive of people at all levels [of experience], including beginners. And it turned out that about half the people who enrolled had never sung in a choir as an adult.” - Julene Johnson

The Mexican-born Moreno’s discovery of her musical talent also bolstered her self-image, though she’d already succeeded, after the death of her husband, in completing a master’s degree in clinical social work and 17 years of employment in that field. Her uncle, Manuel Guerrero, had been a professional singer with the Xavier Cugat Orchestra, and her niece is a music student at UC Irvine, but Moreno had never sung herself before starting classes at the CMC, offered at a senior discount. “We tried to be inclusive of people at all levels [of experience], including beginners,” notes Johnson. “And it turned out that about half the people who enrolled had never sung in a choir as an adult.”

An unanticipated but perhaps not unexpected correlative of the UCSF study, dubbed The Community of Voices, is that many of the 12 choirs, including 30th Street’s and others performing at the Summit, have sustained themselves beyond the one-year period of their funded involvement in the study. Moreno also has expanded her musical experience into regular attendance at the San Francisco Symphony, sometimes accompanied by fellow choristers.

The results of the study, including individual case studies such as Moreno’s, will appear in a variety of professional journals, available online to the general public. “If we can get additional evidence that this is good for people, not just for well-being but also for health, it will be easier to go to funders and make an argument” for more such projects, Johnson hopes.

But the audible results were manifest in the performance at the Herbst by the majority of the study participants. “They’re giving back to their communities, and sharing their talent,” says Johnson, with a tone of pride. “It was almost sold out, and that makes me very happy.”