In 1911, just after the Great Quake of 1906 wiped out much of the city, the San Francisco Symphony was born, and the orchestra is now preparing for a star-spangled centennial season.

Preliminary plans were announced at Davies Symphony Hall on Monday by Executive Director Brent Assink, while Music Director Michael Tilson Thomas tried to participate, but was barely audible, suffering from a sore throat.

The coming season will be his 17th, thus equaling the record tenure here of the legendary Pierre Monteux himself. Full plans for the season will be announced on March 1. 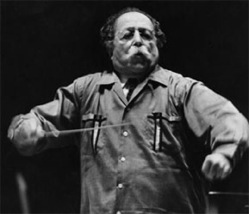 "In marking the orchestra's first hundred years," said SFS President John D. Goldman, "this season is the moment to define what this orchestra will be for its next hundred."

The organization — with its $63 million operating budget, annual audience of nearly a half million, and a staff of 250 — has a major economic, as well as artistic and educational, presence and importance.

Contributions from individuals and companies — led by Bank of America, Chevron, and Wells Fargo — are covering the considerable extra expense of special centennial programming.

In a historic bow to the city, there will be an unprecedented tour to San Francisco by all the country's major orchestras. They include: the 168-year-old New York Philharmonic, led by Alan Gilbert; the 120-year-old Chicago Symphony, directed by Riccardo Muti; the 111-year-old Philadelphia Orchestra with Charles Dutoit; and the 110-year-old Boston Symphony, led by James Levine.

Also scheduled to perform are the Cleveland Orchestra, 92, under the baton of Franz Wesler-Möst; and the Los Angeles Philharmonic, 91, with Gustavo Dudamel. 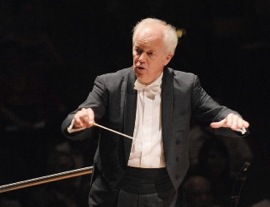 Semistaged concerts will celebrate the music of early San Francisco, from the Gold Rush on. MTT will be joined by former music directors Edo de Waart (1977-1985) and Herbert Blomstedt (1985-1995), leading concerts.

The 2012 Project San Francisco Presents will be Mason Bates and violinist Joshua Bell.

Classical Voice's Jeff Dunn asked how Copland can still be regarded as a maverick, and from what I understood given MTT's strained voice, the answer was something along the line of "he once was." Perhaps the question also applies to Adams, the world's most performed living composer, contributor of two dozen works to SFS. If you are so recognized and established, can you still be a maverick? Only your work can prove that.