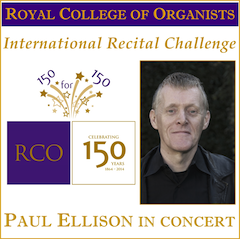 Paul Ellison, organist and music director at Church of the Advent of Christ the King of San Francisco, has joined an international recital challenge for organists from around the world playing in a year-long recital series in celebration of the Royal College of Organists’ 150th anniversary.

Ellison, a native of Liverpool, England, was educated at the Royal Academy of Music in London, London University, Queen’s College, Cambridge, San Jose State University, and Cardiff University. In addition to his duties at Church of the Advent, he is a member of the faculties of San Francisco State University and St. Matthew’s Episcopal Day School in San Mateo.

He played a recital at Church of the Advent of Christ the King on Sunday, performing music by Bach, Brahms, de Cabezón, Karg-Elert, Krebs, Jongen and Walond.

The recital is part of a series of events taking place throughout 2014, as the Royal College of Organists celebrates 150 years of working for the advancement and promotion of the best in organ playing and choral directing.

The organ has been with us in its various forms for more than 2,000 years. The instrument, which Mozart so famously praised as "the King of instruments," has influenced and shaped music, inspired the great composers, played an essential part in supporting worship in churches and adorned our concert halls.

Today the organ sounds as brightly as ever through the rhythms of all of our lives, from christenings, weddings and funerals to our Christmas celebrations, great occasions of State and much more besides.

We are extremely proud that the Royal College of Organists has reached this significant anniversary, and through the 150 for 150 Recital Challenge we hope to share our celebrations with everyone who has an interest in organ and choral music, whether through playing the organ, directing or singing in a choir, or through simple enjoyment of the music.