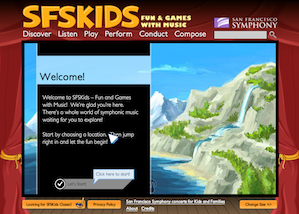 It may not be as slick, sick, and cool as last week’s videos of a new hover skateboard — which is either a tech breakthrough on a par with the camera or the computer, or one of the more compelling hoaxes of all time — but the new San Francisco Symphony website for kids, sfskids.org, is still very cool. And definitely not a hoax.

It’s a 2.0 version of the original SFSkids site, launched nearly a decade ago. Since then, it has attracted more than 5 million users in 20 countries. The old site home page was a huddled jumble of icons and strictly informational. The new site has a dokey, swanky look and is tuned to the new-new technology of gaming.

The site is focused on a half-dozen modules, which allow you to play, perform, conduct, and compose. And also just listen to music, as well as natural sounds. You can write your own music, you can experiment with different instruments, and you can learn the basics of conducting. It’s all in the spirit of fun, including the push to develop expertise by acquiring points. It can be played on either a desktop or a laptop, although in the case of a laptop, you need a mouse as well as the touch pad, in order to simulate the motion of left hand and right hand.

A mobile version is coming but nobody knows when, or which platforms will be supported. The classic version is also still accessible.

“The primary target age is 8 to 13,” the Symphony’s Director of Education Ron Gallman told us earlier this week. “But the reality is that it’s suitable for almost all ages and our hope is that it will be used parents or grandparents or teachers as an information resource, but also a way to really experience the making of music.”

The site’s modules match nationally prescribed music education curriculum standards. And as the Symphony would like you to remember, that this is all part of a commitment to exposing children to classical music that began in 1911, when the orchestra began to play and just its second concert was devoted to children.

The site is also, of course, part of a broad strategy to build an audience to replace the one slowly disappearing now.

Just For the Fun of It

This new SFS website grew out of a collaboration between the organization and UC Irvine’s Institute for Software Research. The Symphony was the lead sponsor in the funding of the effort, which began three years ago with a proposal by Walt Scacchi, senior research scientist at the Institute and director of the Center for Computer Games and Virtual Worlds.

“What we’ve done,” said Scacchi, whose name means chess in Italian, “is to develop fun and games for learning about music, rather than just fun and games with music.”

“What we’ve done is to develop fun and games for learning about music, rather than just fun and games with music.” — Walt Scacchi, research scientist

The site is intuitive and easy to navigate, yet you may find it a little difficult to make some of the gestures, especially on a laptop with no mouse. This is particularly true with the conducting module. But Scacchi insists that what may be awkward for adults is often not awkward for children.

“The difference is this. If presented as a game children expect to have fun. They don’t expect to read a book. Parents, on the other hand, often grew up feeling far more comfortable reading about a game before playing it.”

And so the SFSkids.org site has been designed on the premise that even young children feel a certain level of comfort with online activity. Still, Scacchi’s team is just finishing a guidebook for parents and teachers. “We’re not here to frustrate people, and so if, for example, a school wants to bring this system into a formal curriculum, teachers may need to understand what to do and we are going to publish a kind of manual written by a non-game player.”

The quality assurance part of the software development involved hundreds of players, from as young as four-years-old to 80. Among the participants were students at Pacific Conservatory; but also many people played the games who knew little about either music or online gaming.

Music and the Yellow Brick Road to Science

Scacchi’s hope for the project was that it be both inviting and totally accessible, and at the same time, sophisticated and enlightening. But his interest goes far beyond the creation of an interactive music gaming site.

“What we’ve built is a platform rather than a point solution.” Which is to say, a foundation, not unlike an open source network, where ‘partners’ can add other functions and dimensions.

“We don’t give kids instruments and say, ‘go at it, just have a good time.’ … In the 21st century, we think we can change that. We think we can create something that’s much more fun and playful.” — Walt Schacchi

Scacchi is driven by the idea that this kind of music education vehicle could also have a profound effect in the promotion of science, and that online gaming has huge potential in all kinds of areas.

He’s not alone; the Bay Area is the center of the world in terms of gaming.

“There are interesting points where science, technology, engineering, and math intersect with music and so could provide new ways of activating the curiosity of children — to reinforce their interest in science, technology, engineering and math. And so why not? Many kids often want to be technology savvy. Now, of course, this isn’t the usual way music has been presented; the focus has long been on teaching you to play an instrument before you get to play music, and we rarely teach you how to make music.”

The analogy, says Scacchi, is that moment when you were four or five and you were given paper and crayons and left to your own devices. In an instant, you were making art, not very good art most of the time, but you were creating. And you weren’t held up by the idea of what you didn’t know.

“And that’s the point: We don’t give kids instruments and say, ‘go at it, just have a good time.’ As a result, we have lots of kids learning to play music that get caught up in the formal music education system — which results in relatively few people having successful music-playing experiences. In the 21st century, we think we can change that. We think we can create something that’s much more fun and playful. And to be clear, we’re not trying to discount the integrity of becoming a master, quite the contrary; we’re trying to grow those populations.”

Scacchi is sure that these same approaches can be brought to other subjects, such as American history, which is often considered unpopular in middle school — in other words teaching history through music.

His vision is grand. He would like to perform an education makeover in this country. He would also like to see the kind of political commitment the Swiss have made to music education. In 2012, they passed a constitutional amendment requiring that music be part of education.

But of course, transforming education is all but impossible, and so he’s content to try to transform learning, as much as he can, forging a new path, focusing on the informal aspects of learning through games.

As for SFSkids.org, Scacchi’s advice is, “If you’re an adult go try it with a young person.