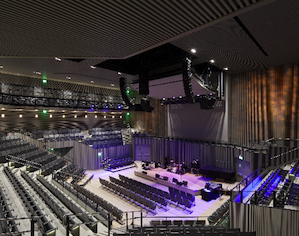 Sunday, along with the Niners making their way into the Super Bowl, and Monday, at the same time with the Presidential Inauguration, the country's first concert hall dedicated to jazz made headlines too.

At a preview of the SFJAZZ Center, the $53 million low-rise building in the heart of Hayes Valley was called a temple "to the national art form," which — bandleader/percussionist John Santos added, "is generally disrespected in this country more than anywhere else." Santos has been intimately involved with SFJAZZ, ever since participating in the organization's first concert 30 years ago.

The 700-seat, 35,000-square foot facility is radically different from its many performing-art neighbors within a few blocks of the Civic Center, such as the War Memorial Opera House, Davies Symphony Hall, Herbst Theatre, Bill Graham Civic Auditorium, and the new San Francisco Conservatory Concert Hall.

The others are built for performers facing an audience; somewhat similarly to Stanford's brand-new Bing Hall, SFJAZZ Center brings artists and audiences together in a community, listeners surrounding the stage, performers having the experience of playing music at close quarters. There is no clear separation in the hall, the place seems a hybrid of theater and jazz club. 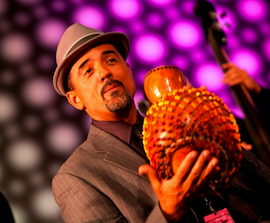 SFJAZZ Founder and Executive Director Randall Kline, the dynamo driving both the organization and the creation of this unique facility, and architect Mark Cavagnero spoke about visiting Unitarian churches and other "meeting-based facilities" for inspiration.

Len Auerbach's theater design (with some questions, see below) and Sam Berkow's acoustics are splendid; heard from various spots around the hall, Santos' music came across clearly, intimately, and very well.

"Community" is emphasized over and over again, and the words are made good through such practical measures as a window that provides Gough Street passersby with a view of the stage, famed Slanted Door owner chef Charles Phan setting up the Center Cafe-Bar, to be open day and night.

Phan is considering what kind of breakfast people in Hayes Valley may prefer, he juryrigged a way to brew coffee, instead of getting it ready in advance, has a whole system being set up for serving drinks fast for show audiences. Seats — sleek, comfortable, acoustic-friendly — all have movie-theater style cup holders.

A few nitpicks about the theater design:

- Against the simple, unadorned wooden floor on stage and the main floor, upstairs is all concrete, with a corresponding harsh look.
- The walls, slotted, painted wood are prison-gray; green exit signs provide the only color in the hall.
- Long central rows have 20 seats without aisles; upstairs, there are "false aisles," with entrance from one side, the innermost seat against a barrier, including some structural obstacles where there is space for an aisle.
- Several steep rows upstairs are accessible by steps without a handrail — that, if anything, could and should be corrected.

Dave Holland will be in residence for four nights, solo, with his Quintet, with Kenny Barron, and at the premiere of his new project, "Prism."

Bill Frisell and Miguel Zenón are scheduled at the center, Frisell presenting Allen Ginsberg’s Kaddish and Hunter S. Thompson’s The Kentucky Derby Is Decadent and Depraved.