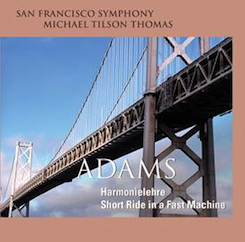 Michael Tilson Thomas and the San Francisco Symphony will receive the ECHO Klassik Award 2013 for "Orchestra of the Year" in the Berlin Konzerthaus on Oct. 6. MTT/SFS is honored for its hybrid SACD of music by John Adams, released on the orchestra’s own label, SFS Media, last year.

What is ECHO Klassik? Get ready for the official explanation: "The ECHO Klassik is one of the world’s most established and coveted music awards, presented since 1994. Each year the Deutsche Phono-Akademie, the cultural institute of the Bundesverband Musikindustrie (German Music Industry Association), honors outstanding performances by international artists with this award."

This is the second time a San Francisco recording is receiving an ECHO award. Charles Ives, an American Journey was named Symphonic Recording of the Year in 2004.

Future releases on SFS Media will include Beethoven’s Symphony No. 2 and the Cantata on the Death of Emperor Joseph II in November 2013, and the first recording of the SFS-commissioned Absolute Jest by John Adams in March 2014.

Among other award recipients: