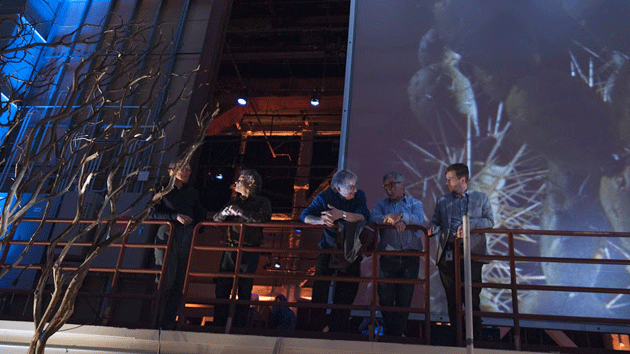 Let me elaborate: the combination of classical and avant-garde music, performed against video installations, with a full bar "serving specialty cocktails and gourmet bar bites that the audience can enjoy during the performance" is meant to recruit new audiences. As to the venue, it's not so much the backstage as the Zellerbach Rehearsal Hall, at 300 Franklin Street, behind Davies and the parking lot.

Music Director Michael Tilson Thomas will lead the opening night of the series on Dec. 13, with an unusual starting time of 9 p.m., taking listeners through a "musical tasting menu" (that's what it's called) that ranges from a Medieval Gregorian chant and plainchant by Josquin des Prez to works by Meredith Monk and Steve Reich, then back to Monteverdi.

Before the concert, watch and hear a soundscape installation derived from John Cage's Branches, music for amplified plants, with video art by Adam Larsen. MTT cautions: "Some of the music will take the volume level of the room to its absolute limit, and some will be on the threshold of audibility. We will also experiment with visual possibilities of the room, using video projection and environmental installations."

There will be four other events in the SoundBox series: on Jan. 9 and 10, SFS members will present programs that draw on each musician’s interests. The SFS percussion section leads the Feb. 13 and 14 shows, taking the audience through an array of instruments and sounds, and inviting the audience participate in the music-making.

Composer Nathaniel Stookey and conductor Edwin Outwater program the shows on March 6 and 7, with participation from composers Terry Riley, Nicole Lizée, and sculptor Oliver DiCiccio. At the final event, on April 9 and 10, composer Samuel Adams leads a program showcasing the next generation of composers, including Adams himself, and projections by visual music artists.