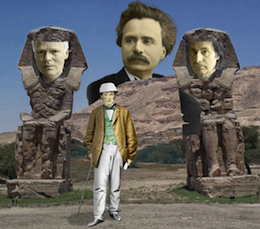 Henryk Ibsen is not just a favorite playwright, he is somewhat of a passion. So much so that back in university days, I took four semesters dealing with the great Norwegian's work with a famous literary scholar, Albert Gyergyai. And yet neither back then nor since have I been able to get a good grip on Ibsen's largest, most ambitious and difficult play, the 1867 Peer Gynt.

Unlike the laser-like focus and searing psychological insight into characters of A Doll's House, Hedda Gabler, The Wild Duck, An Enemy of the People, and other Ibsen masterpieces, Peer Gynt is inchoate, abstract, and works much better as poetry to be read than a play. After initial popularity in European theaters, it became a rarity, especially in the U.S. — with a few exceptions in the Bay Area and Ashland.

With a huge cast of characters, 40 scenes alternating in time and space, blending fantasy and realism, Peer Gynt is a daunting theatrical challenge. Grieg's 1876 incidental music, written at Ibsen's request and originally premiered with the play, is now usually performed in symphonic suites.

San Francisco Symphony is getting into Peer Gynt in a big way, Michael Tilson Thomas conducting three concerts, Jan. 17-19, featuring extensive excerpts from the Grieg score, along with music written for the play by Alfred Schnittke and Robin Holloway. Says MTT:

It is a gigantic, sprawling play, probably best known through Grieg’s music. I don’t think that people have an idea of what a challenging and provocative play it is — filled with questions about life, and love, and all of those things. Both Alfred Schnittke and Robin Holloway produced huge scores for Peer Gynt. This program is a wonderful opportunity to connect Ibsen’s play with these three composers. Given the vast length of the [original] play — four hours! — we can offer a musical and dramatic snapshot of both music and text [in a two-hour concert]. 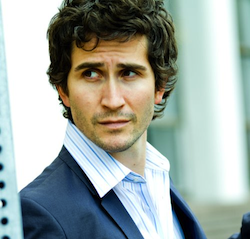 The semi-staged production is directed by James Darrah, with Adam Larsen's projections. Ben Huber appears in the title role, Joélle Harvey is Solveig (whose song is best known in the Grieg score, along with "Anitra's Song," "In the Hall of the Mountain King," and "Peer Gynt at the Statue of Memnon").

The SFS project originated with the success of other staged Symphony production, says John Mangum, SFS director of artistic planning:

The impetus for the project came out of our performances last season of Debussy's Martyrdom of St. Sebastian [also with Larsen's video]. We were all very pleased with how that turned out — we felt like we'd really explored new territory with the combination of music, visuals, dance, and staging.

We wanted to push that further with another musical-dramatic project — not necessarily a concert staging of an opera — the Debussy was incidental music, and the Ibsen had inspired not only Grieg's score, but also Schnittke's ballet (for me, one of his masterpieces), and a series of orchestral pieces by Robin Holloway.

The Holloway was on our mind because we'd been looking at those scores last fall, trying to figure out a way to do some of the music — it's this amazing, evocative set of pieces that Robin just wrote, and they've never been performed. What we've come up with combines scenes from Ibsen with the music by Grieg, Schnittke, and Holloway to create something that will feel all of a piece dramatically.