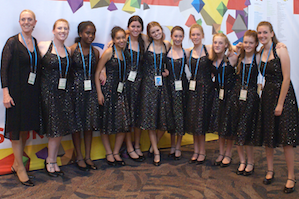 Singers Marin was established as a nonprofit by the illustrious singer and teacher Jan Pedersen Schiff in 1987, who remains the artistic director of the group of choirs. It's among the better choirs in the Bay Area and just this summer the older group, known as Les Etoiles, won silver at the World Choir Games, held in Cincinnati. The competition included 360 choirs from 60 countries. Later this month, in collaboration with the Golden Gate Opera, younger children will sing in Hansel & Gretel (Oct. 26 and 28), a two-hour performance at the Showcase Theater in San Rafael.

The Singers Marin choirs are divided into these groups: Caroling kids (5 to 8-years-old); Starlight (9, 10); Celestial (11, 12). There are about 15 singers in Starlight; 8 in Celestial. You can still find a place in the Caroling kids. But hurry. Otherwise, next auditions are in January.

Amanda Morando is the Youth Conductor, an alumna of SingersMarin as well as UC Santa Barbara (’09), where she took a degree in Music in Vocal Performance. “If you’re interested, you would set up an audition with me. We’re very inclusive; we want to accept everyone. For younger kids we ask them to sing a song of their choice; for older kids we ask them to sing the "Star Spangled Banner."  We also ask the older kids to sing a scale and we want to see if they can read music. If they have an ear and some ability and enthusiasm, we find a place for them. Naturally, we want to be sure that kids can concentrate and hold their focus for a period of time.”

On April 23rd, its 25th anniversary, the company will perform at Davies Symphony Hall with the Mill Valley Philharmonic.

One-hour classes are in Mill Valley, at Mt. Tam Methodist Church, or for Caroling kids in both Belvedere and San Rafael. Those classes include movement and games, as well as basic technique and rhythm. Starlighters meet once a week; Celestials, twice. Tuition ranges from $250 to $400 a semester.