Listening to this monumental achievement, recorded between 1958 and 1964 with the Vienna Philharmonic and many of the finest Wagnerian singers of the era, enables us to appreciate anew the scope of both men’s greatness.

The new set’s sound, drawn from digital masters created in 1997, is definitive. As unimaginable as it may seem, the original analog tape masters of what has been called the most important stereo recording of the 20th century have disintegrated to the point where another digital remastering is all but impossible. Thankfully, the digital mastering of 1997 was accomplished in 24-bit, 48kHz high-resolution sound, which was pretty much digital state-of-the-art for the period. 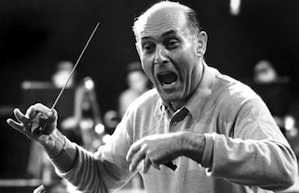 Although it was impossible for music lovers to hear the full glory of that digital remastering back then — CD has always been limited to 16-bits, 44.1kHz, which cannot convey the full sonic spectrum of music and voices — it is now possible to deliver the full glory of 24-bit, 48kHz sound via the high-resolution capacity of Blu-ray. Hence, the new set includes, for starters, Solti’s entire Ring on a single high-resolution Blu-ray disc. To listen on a good system is a revelation.

Decca’s new multi-LP sized Ring package, housed in a cardboard slipcase, consists of four hardbound books that together weigh over 11 lbs. Vol. 1 contains recording producer John Culshaw’s long-out-of-print Ring Resounding, an engrossing, book-length memoir of the recording from genesis to completion. Vol. 2 contains a single Blu-ray disc of the entire cycle in high-res sound; 14 CDs of the same music, sounding better than the 1997 digitally remastered set, because of improvements in CD technology; and a 15th CD of Solti’s contemporaneous recordings of three Wagner overtures and two Ring-associated chamber works. Vol. 3 contains large-format prints of session photos; original promo materials and reviews; facsimiles of one of the maestro’s marked-up scores, complete with notes and a discussion of him in the studio by Charles Kaye, Solti’s executive assistant 1977–1997; the complete text of Deryck Cooke’s learned introduction to the Ring cycle; and a DVD of The Golden Ring, Humphrey Burton’s hard-to-stop-watching 1966 documentary on the recording of Acts 2 and 3 of Die Götterdämmerung, complemented by notes on the filming. Finally, Vol. 4 contains all the librettos, with Wagner’s German mirrored by Stewart Spencer’s English translation. Amazon’s price of a set that’s sure to sell out is heavily discounted.

While Georg Solti recorded music over a span of half a century — from 1947, the year after he was appointed music director of the Bavarian State Opera in Munich, to 1997, when he served as music director laureate of the Royal Opera House, Covent Garden, and had founded the World Orchestra for Peace — it is to his Ring that we ultimately turn for confirmation of his greatness. With the release of the high-resolution Blu-ray version, that assessment can be accomplished in greater depth than ever before.

The Decca team achieved a quality of sound and detail unprecedented for opera recordings of the period.

As is revealed in The Golden Ring documentary, Solti, Culshaw, and a crack engineering team (which included Gordon Parry and Christopher Raeburn) were committed to making the most of their historic opportunity. With the support of Decca, which decided to suppress the actual first stereo Ring, recorded live at Bayreuth in the mid-1950s (conducted by Joseph Keilberth and now available on the Testament label), and instead release Solti’s studio effort, the men went whole hog.

In the era before home video, DVD, and Blu-ray, Solti was challenged to make an opera recording that came across as vividly as a staged performance. The Ring offered him a supreme opportunity to provide a model of what can be done with audio alone. 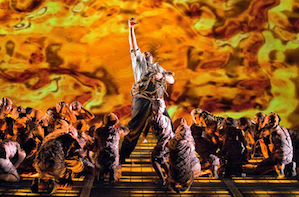 Thunder, anvils, and a host of other sound effects were only part of Culshaw and crew’s attempt to achieve a “you-are-there” experience so vivid that listeners would not feel shortchanged by the absence of visuals. Taking advantage of the “new” stereo medium, a three-dimensional sound stage of sorts was simulated by literally shepherding/shoving the singers around (both from left to right and from front to back) during recording.

While dynamics were somewhat compressed — you can see Parry riding the master volume and mixing levels during peak passages, doubtless concerned that Birgit Nilsson’s trumpeted high Cs and an anvil at full tilt would either wreck loudspeakers or cause needles to jump from groove to groove — the team achieved a quality of sound and detail unprecedented for opera recordings of the period.

On the new Blu-ray, for the first time in the digital era, we can get startlingly close to the sound the engineers heard at the control room mixing board. Cellos and basses have far more richness than on CD, the authentic timbre of the Vienna Philharmonic’s rotary-valve trumpets comes through with startling immediacy, and the orchestra’s fabled silken strings sing as never before. Voices, too, take on greater richness, weight, and depth. The sound and sweep of orchestra and voices at full throttle is so rich that, at times, it takes the breath away.

As for those sound effects, the anvil strikes on Blu-ray were startling enough to wake one of my pooches from sleep. Indeed, so captivating is the sound that it took me days before I could tear myself away long enough to write this appreciation.

A Feeling for the Recorded Medium

Many of the critics who have decried Solti’s virtually Technicolor sound were probably unable to hear the recording as its engineering team wished it to be heard. When played back in high-resolution, virtually everything Solti does makes musical sense. Keenly aware of his singers’ capacities, he plays to their strengths. While giving them sufficient space to negotiate passages they find challenging, he knows when they can let it rip. When Nilsson gets going full force, for example, he allows the orchestra to rise to equal heights.

For listeners who have always found Wagner’s music “heavy” or forbidding, Solti’s Ring in high-resolution sound is a perfect way in.

Wagner was so convinced of the power and importance of his story and music that he allowed himself to write music dramas of unprecedented length, with three of the operas clocking in at over four hours and, in the case of Das Rheingold, the first of the four Ring operas, a single 2½-hour act. Without visuals, or with the static visuals that weighed down many old-time Ring productions, long periods of dialogue can prove tedious affairs.

Solti seemed aware of this problem. By choosing great singers adept at animating dialogue, and by skillfully underscoring the orchestral motives that hold the Ring together musically, he managed to make an audio recording every bit as vital as was Francesca Zambello’s 2011 “Green” Ring for San Francisco Opera.

SFCV’s senior editor, music historian Michael Zwiebach, affirms that Solti managed the unmarked changes in tempo in Wagner’s Ring scores in a masterful way, which effectively responded to changing dramatic situations. “On record,” he says, “Solti is a fabulous opera conductor. He brings you all of the drama without lingering over passages that don’t work at a slow tempo unless accompanied by visuals. Though he drives the music forward, he is not relentless, but instead judges what needs to happen in the immediate moment and how it will play in the context of the total recording.”

For listeners who have always found Wagner’s music “heavy” or forbidding, Solti’s Ring in high-res sound is a perfect way in. Especially when listening is augmented by Cooke’s fascinating introduction, the glories of Wagner’s orchestral scoring, not to mention the immense power of his vision, are revealed. There have been other Wagnerian conductors of equal or even greater vision — Wilhelm Furtwängler being one — but Solti was the first with the ability to marry musical vision with superior recording technology.

At virtually the same time as the release of the deluxe Ring, Decca has issued no fewer than five Solti CD box sets: Mozart operas (15 CDs), Strauss operas (15 CDs), Verdi operas (16 CDs), Wagner operas (36 CDs), and Solti: The Legacy 1937–1997 (2 CDs). The latter begins with Solti playing the glockenspiel in Toscanini’s 1937 Salzburg performance of Die Zauberflöte; extends through Solti and Murray Perahia playing piano in a 1987 Chicago Symphony Orchestra performance of Mozart’s Concerto for Two Pianos and Orchestra, recorded during Solti’s 22-year tenure as CSO’s music director; and ends with a 1997 recording of “Pace, pace mio Dio” from Verdi’s La forza del destino, with Angela Gheorghiu, whom the conductor championed.

The bulk of the tribute, however, is devoted to a host of previously unissued opera excerpts, recorded live. Hearing them reminds us that as much as Solti is known for the drive of his Ring, he is also able to slow down and let us smell the flowers that perfume a good deal of Die Walküre’s first act and, in Siegfried, the young hero’s meditations and Brünnhilde’s glorious awakening scene.

Any opera lover who thinks she can live without hearing Pilar Lorengar, Josephine Veasey, and Keith Engen’s “Soave sia il venti” from Mozart’s Così fan tutte at the Royal Opera House, Covent Garden, in 1968, recorded live during Solti’s 10-year tenure as ROH music director; Elisabeth Schwarzkopf sing with remarkable poise and grace in an astoundingly slow final trio and duet from Strauss’ Der Rosenkavalier, recorded in 1959; and Hildegard Behrens’ brief excerpt from the Immolation Scene of Götterdämmerung, recorded at Bayreuth in 1983 with tone far more beautiful than anything Birgit Nilsson ever produced, had better think again. An equally rare experience is Hans Hotter’s performance of Schubert’s “An die Musik,” recorded in 1992 at Solti’s 80th-birthday celebration in Buckingham Palace, when the great Wotan of Solti’s Ring was 81.

As we listen to these and a host of other frustratingly brief opera excerpts, we are reminded that as much as Solti could beat his orchestra into a Wagnerian frenzy, he could just as easily turn on a dime and stretch tempos out to near-infinity when his singers could employ them to their advantage. This versatility ensures that his Ring, especially when heard in the new Blu-ray issue, will remain a recording for the ages.