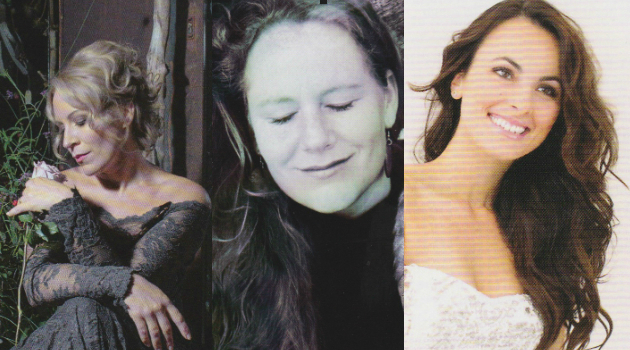 As the performing season ends, and fewer concerts vie for attention, we may turn to recorded music for our full share of joys and sorrows. Three song recitals from very different artists who have performed in the Bay Area – sopranos Carolyn Sampson and mezzo-sopranos Isabel Leonard and Christianne Stotijn – not only deliver their fair share of beauty, but also impel us to dive deeper into the song repertoire.

The subject matter of Fleurs(Flowers), the first song recital from English early music specialist Carolyn Sampson, seems tailor-made for the season. It is also graced by a freshness and purity of voice ideally suited for floral subjects. From Henry Purcell’s “Sweeter than Roses” to Emmanuel Chabrier’s “Toutes les Fleurs!” (All the flowers), Sampson’s lovely, uncomplicated tone and palpable sincerity are all one could ask for.

Marvelously accompanied by pianist Joseph Middleton, who is as sensitive to the expressive demands of a song as to the singer’s interpretative strengths, Sampson sails through the fast passage of Purcell with the same ease with which she luxuriates in the sunny, springtime start of Robert Schumann’s “Meine Rose” (My rose). Even when sadness crosses her path, as it does in many songs on the program, the basic shine of her voice assures us that we will never linger there long.

It may seem churlish, in the face of so much unsoiled beauty to ask for more. But Sampson could push her emotional investment further, if she wants to equal the recorded legacy of some of this repertoire. Turning from Sampson’s interpretation of Schumann’s “Schneeglöckchen” (Snowdrop) to an 85-year old recording by soprano Elisabeth Schumann yields, if not such consistently sunny tone, a far more emotional response and range of nuance, as well as a surprisingly greater, infinitely delightful burst of golden light at the top of the range.

I wouldn’t be making these comparisons if Sampson’s repertoire choices were not so wonderful, and her performances so beautifully sung and accompanied. While her interpretations may not be incomparable, the excitement she brings to Strauss’ “Mohnblumen” (Poppies), the gentleness that she lends to his “Epheu” (Ivy), and the atmosphere with which she illumines Lili Boulanger’s “Les lilas qui avaient fleuri” (The lilacs which had flowered last year) are so compelling that the recording can be highly recommended.

That and more can be said about American soprano Isabel Leonard’s Spanish language song recital, Preludios(Preludes). The youngest of these singers – she turned 31 in 2013, when she made this recording – her natural depth of tone and gravitas seem ideal for songs by Federico Mompou, Manuel de Falla, Federico Garcia Lorca, Enrique Granados, Xavier Montsalvatge, and Joaquin Valverde Sanjuan.

The songs themselves are melodically and harmonically splendid. Pianist Brian Zeger may plod a bit too much in the haunting “Solo las flores sobre ti” by Mompou, but Leonard’s response is so beautiful and heartfelt that hitting “repeat” is in order. Ditto for virtually everything else she sings, including her occasional forays on high, when the sound is absolutely gorgeous.

What Leonard lacks, at least at this point in what will hopefully be a long career, is the widest possible range of emotional responses. Yet all of Leonard’s instincts are right on. It will be interesting to discover how her interpretations grow with the passage of time.

The remarkable Dutch mezzo Christianne Stotijn lacks neither imagination nor emotional compass. Not even the subject matter of her consistently surprising recital, If the Owl Calls Again, which was inspired by the eponymous poem by John Haines, is conventional.

“The call of the owl is like a cry of pain, of life and of death,” she told liner-note writer Hein van Eekert. “It’s a call for humanity to return to its mission, to the reason we exist, and the question of what our purpose is … In this selection of songs, we encounter both the deepest resonance of the primal force and the voice of uncertainty and doubt.”

If that sounds like heady stuff, wait until you hear the repertoire. How many other recitalists would construct such an off-the-beaten-path, seven-language program of songs by Joseph Marx, Fant de Kanter (b. 1969), Mussorgsky, Maurice Delage, Ravel, Frank Martin, André Caplet, and Frank Bridge? How many would move beyond traditional piano accompaniment to welcome everything from viola to an Armenian duduk and double bass?

Stotijn embraces her repertoire with a probing spirit and commitment second to none. Her voice is not conventionally beautiful – it can be a little rough on bottom, and wide and unruly of vibrato on top. And her frequent tendency to hit a held note straight, only to break into vibrato toward the end, smacks more of jazz that “catholic” art song style. But her interpretations are so remarkably expressive that the album is surely destined for classic status. For examples of Stotijn’s versatility, listen to how she alters her voice to imitate both a naively devious little girl and her old grandmother in Mussorgsky’s droll “Evening Prayer,” and then brings yet another voice to his other songs.

Not that all of Stotijn’s interpretations are devoid of controversy. On Maurice Ravel’s unusual “Kaddish,” where both soprano Madeleine Grey (with Ravel at the piano) and mezzo Cecilia Bartoli (with Myung Whun-Chung) sound deeply reverent, Stotijn taps into a primal wildness of spirit that is destined to raise eyebrows among the devout. You’ll hear the same wildness in Kanter’s prayer, “Abboen” (Source of Being), and his other songs. Stotijn’s imitation of a bad, bad dog begging God for forgiveness gets so animated that it borders on shrillness before shifting into heavy duty imploration and a final droll surprise destined to leave some listeners howling. But Kanter’s songs were written for her voice and artistry, and seem tailored to her brilliance.

That Stotijn does not confine herself to the traditional “art song recital” box leaves us all the richer. Though the recording’s engineering, both in terms of balance between voice and instruments and choice of reverberant envelope, is not about to win any awards, If the Owl Calls Again very well may. You have to hear it.