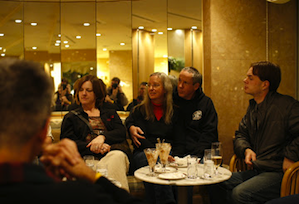 Bay Area's Sonos Handbell Ensemble arrived in Japan last week, and were greeted by a 7.3 earthquake, which caused relatively little damage and did not harm the Californians. Director James Meredith focused on work, not the tremors:

We played our first concert on the 9th at the beautiful wooden Itami Aiophonic Hall (600 seats) in Itami City. We played there first in 2005. The hall is 20 years old, just one of the many venues built during the 90s economic boom. Wish the Americans had done the same with their money.

I wish we could pick this hall up and bring it home. The acoustics are so incredible. I heard my two works with all of the sounds and sonorities I have only heard in my head up to this point, and we have been playing these works for several years all across the U.S., Estonia and Finland. What a thrill for me.

The ensemble went on to Niigata to give a concert in nearby Uonuma City, identified by Meredith as the birthplace of George Takei. They will perform in Fukushima and Sendai, returning to places they visited before, and now probably damaged beyond recognition by the great tsunami of March 11, 2011.