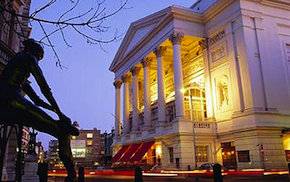 The Royal Opera House is holding an unprecedented 10-hour open house Monday, Jan. 7, streamed live, beginning at 2:30 a.m. Pacific Time. Admittedly, the starting time is not all that great for San Francisco, but the program runs through 12:30 p.m., certainly more convenient.

Similar to the Royal Ballet Live program early in 2012, Royal Opera Live will spend the entire day backstage one of the world's premiere opera houses. It will be broadcast on the Royal Opera House and the Guardian websites, plus on a new digital arts service, The Space.

Highlights of the day will include working rehearsals of Harrison Birtwistle’s The Minotaur and of Kasper Holten’s new production of Tchaikovsky’s Eugene Onegin, a Royal Opera Chorus rehearsal for Verdi's Nabucco, and much more.

The program will conclude with the complete performance of Act 3 of Wagner’s Die Walküre, recorded earlier with 21 cameras.