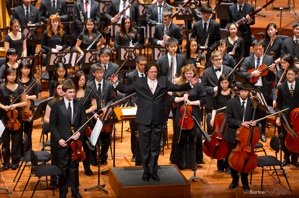 SFCV sent videographer Vincent Tremblay to capture all the action at BAYOF. Watch clips from the orchestras and backstage interviews with some of the performers!

Donato Cabrera was rehearsing Gustav Holst’s orchestral suite The Planets with the San Francisco Symphony Youth Orchestra at Davies Symphony Hall two Saturdays ago, shaping a lyrical melody in the “Venus” movement that’s introduced by the first oboe. The ebullient maestro encouraged oboist Leo Tsui to sing it out.

“Imagine you’re in the middle of the orchestra, the lights dim, and there’s a big spotlight on Leo, okay?” said Cabrera, singing the expansive phrase and making a sweeping gesture with his left hand. “Go for it!”

Tsui nailed it, playing the beautiful melody with aplomb. The strings picked it up and the music soared.

“Yes, Leo!” cried the conductor, as the musicians applauded their colleague by shuffling their feet or tapping their bows. Watching the rehearsal, you could feel the shared passion and commitment these gifted young players bring to this splendid orchestra, which celebrates its 30th anniversary on Sunday.

In addition to The Planets, the Youth Orchestra, whose local performances, international tours, and recordings have brought it wide acclaim, will perform Bartók’s Divertimento and a surprise overture. The ensemble has been rehearsing the music every Saturday for months. They’re coached by San Francisco Symphony players who lead 75-minute sectional rehearsals that precede the nearly three-hour rehearsals of the full orchestra.

“I have the honor of working with one of the greatest youth orchestras in the world,” says Cabrera, who became the resident conductor of the San Francisco Symphony and music director of its Youth Orchestra in 2009. “These kids are as good as it gets, in terms of talent and commitment.”

Along with the Cleveland Orchestra and the St. Louis Symphony, the SFS is one of the few major orchestras in the country with its own youth orchestra. Founded in 1981, a year after Davies Hall opened, it was created to give free, “preprofessional” training to the Bay Area’s most gifted young musicians. About a quarter of the players, who range in age from 12 to 21, go on to professional careers. The orchestra’s alumni include Tim Genis, principal timpanist with the Boston Symphony Orchestra; SFS assistant principal violist Katie Kadarauch; and Kronos Quartet cellist Jeff Zeigler. Jahja Ling was the first music director, followed by other notable conductors: David Milnes, Leif Bjaland, Alasdair Neale, Edwin Outwater, and Benjamin Shwartz.

“I don’t think I’d be where I am today without the experience of being in the youth orchestra. That was a major part of my training,” says Genis, who played in the ensemble for its first four years. He drove up from Redwood City every Saturday, and often came up weekdays after school to practice. Playing on the Davies stage thrilled him. 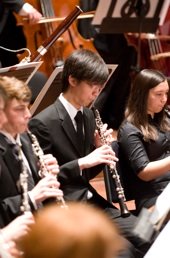 “It was my first taste of playing in what felt like a professional situation. It was inspiring and very daunting,” says the timpanist, a pianist who’d never really played percussion until he landed a coveted spot in the orchestra (some 300 aspiring musicians audition every year). He was coached by now-retired Symphony timpanist Anthony Cirone.

“I was surrounded by these really well-trained musicians,” says Genis, “and I felt quite out of my element. But I quickly took to it. I fell in love with it. That’s when I realized I wanted to be a professional orchestral musician.” During his first year at the Eastman School of Music, he got hired as a substitute with the Rochester Philharmonic. “I knew what I was doing because of the four years with Youth Orchestra.”

Best of the Best

Clarinetist Rob Bailis, who plays in a number of Bay Area ensembles, including the Napa and Santa Rosa symphonies, played with the Youth Orchestra from 1987 to 1989, primarily under Bjaland’s baton.

“Playing in one of, if not the best, youth orchestras in the country every week changes your whole notion of what you’re capable of,” says Bailis, who serves as the artistic director of the ODC Theater in San Francisco. “You found out what a real level of professional playing sounds like, and what it takes to create it. The Youth Orchestra still plays better than a lot of professional orchestras.”

Something electric happens, Bailis goes on, when “young people do something at the highest level for the very first time, together. That is absolutely life-altering.”

Flutist Pavitra Rengarajan, a 16-year-old from San Jose, successfully auditioned for the orchestra last year, playing the Devienne Flute Concerto plus excerpts from Beethoven’s Leonore, and also sight reading. She’d played in other Bay Area youth orchestras, but none was as demanding and rewarding as this one. 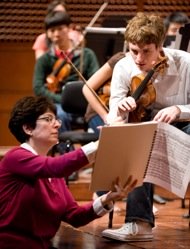 “Nobody is unprepared in this orchestra,” says Rengarajan, who raves about the coaching she and her fellow flutist receive from Symphony piccolo player Catherine Payne. Payne was on hand the other day when Cabrera led the woodwind sectional that focused intensely on intonation, articulation, and phrasing. She also sat in with the orchestra during the full rehearsal, as did Symphony harpist Doug Rioth and other pros.

“You put your heart and soul into this, and everybody around you is doing the same thing,” says Rengarajan, who’s thinking about pursuing engineering or medicine as a profession while continuing to play music. “It’s a great feeling.”

The flutist can’t wait until next year, when the orchestra tours Europe again, on its ninth international tour. The first was in 1986, when it scored the prestigious City of Vienna Award at the 15th International Youth and Music Festival. Three years later, the orchestra made its first Asian tour. In 2001, the ensemble, which has performed with celebrated artists like Yo-Yo Ma and Yehudi Menuhin, played in Russia and Lithuania.

The youth orchestra has made a series of impressive recordings, including a version of Mahler’s Fifth Symphony taped live at Davies Hall in 1995; Rachmaninov’s Symphony No. 2, recorded live in 1998 at Prague’s Dvořák Hall; and a pair of compilation CDs celebrating the orchestra’s 10th and 20th anniversaries.

Bassist Zachary Ostroff knew he wanted to be in the orchestra after hearing a recording of the first movement of Brahms’ Symphony No.3 on the first of those commemorative discs. 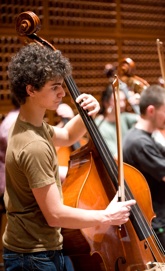 “The sound took me totally by surprise,” says Ostroff, 18, a versatile jazz and classical player who won a spot in the orchestra last year. “If nobody had told me it was a youth orchestra, I never would’ve known.”

Ostroff, who attends the Branson School in Ross, studies with Symphony bassist Ken Miller and will study with the great jazz bassist Ron Carter when he moves to New York next year to attend Columbia University. Playing with the orchestra, and rehearsing on the Davies stage in the company of top musicians, has been a transformative experience for him.

“Working with Donato [Cabrera] has totally changed my perspective on playing music,” he says. “He approaches the music with such vitality, and gets into it to the point where these notes start to come alive for me and have meaning. When I’m playing in this orchestra, with a conductor like him, I feel it’s my responsibility to make sure that every note is as true to the music as possible.”

For Cabrera, who thinks the coaching by Symphony musicians is key to the youth orchestra’s success, the main challenge is finding the right way to talk about masterworks that most of these young musicians are playing for the first time. He’s acutely aware, from his own experience, of how that initial exposure to a piece of music like Brahms’ Symphony No. 1 — which the orchestra played last year — can shape the way we think of it the rest of our lives.

“That’s why it’s so important that what I say about the music is right on the money,” Cabrera says. “No one in the orchestra, except for one or two, has played The Planets before. I feel privileged to watch them explore these masterpieces. I get goose bumps thinking about it. There’s such a sense of discovery.”