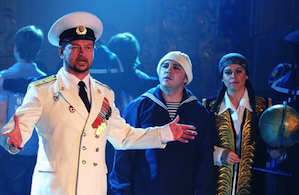 A story difficult to believe, but apparently true and there is even video from the production:

As the curtain rises, a gray-suited figure looking suspiciously like Russian President Vladimir Putin stands in front of a huge map of Crimea and reads a poem titled "My Crimea." Later, groups of happy children dance and sing Crimean Tatar songs.

On July 10, the St. Petersburg Opera Theater debuted Crimea, a new production based on a 1946 opera called The Sevastopolians by Marian Koval.

Koval, who died in 1971, was a laureate of the prestigious Stalin Prize, and well known for his role in the Stalin-inspired campaign against fellow composer Dmitri Shostakovich.

The new production is billed as an "opera-rally." According to the publicity, it is "an operational meeting with the public" in which the audience takes an active part and, in one scene, viewers are asked to "express their civic position." In the finale, a choir of Crimeans turns to the audience and sings "Take us with you!"

Russia annexed the Ukrainian Black Sea region of Crimea in March over the protests of Kiev and most of the international community.

Art director Yury Aleksandrov removed all the hymns to Soviet dictator Josef Stalin and the romantic subplot of the original, leaving behind only love for the Motherland.

"Our main position is clear and principled," he said. "We have Crimea. It is ours. We will not surrender it to anyone. No one ordered this work. No one paid for it. We did it ourselves with our own resources. We couldn't be silent," Aleksandrov adds.

"Our intelligentsia is acting just like it did in 1914," he said. "Then it was joyfully shouting 'The Bosporus and Dardanelles are ours!' and 'Long live the Russian Army!' Everyone loved the tsar and the government, while shamefully ignoring the pogroms against Germans that were taking place at that time in Petrograd. Just two years later, in 1916, the views of the Russian intelligentsia and the public toward the government changed 180 degrees. Unfortunately, this is a common phenomenon with us."