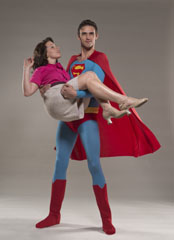 Without apologies to Churchill: Never was so much done by so few with so little.

With apologies to Charles Strouse and Lee Adams: Their musical about Superman belongs to Forgotten Broadway.

Directed brilliantly by Dyan McBride, the Saturday opening of It's a Bird ... It's a Plane ... It's Superman unexpectedly provided a smiles-and-warmth-filled evening.

Once again, these Moonies put their heart into creation of a vibrant, funny, entertaining show, where there is not much on paper.

This is the 80th anniversary of two teenagers creating Superman, which became an Action Comics sensation five years later. Long after that, in the early 1960s, Harold Prince asked Bye Bye Birdie (1960) authors Strouse and Adams (who went on to create Annie in 1977) to come up with a musical spoof of the Man of Steel. 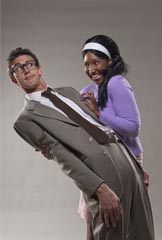 The show opened on Broadway in 1966, received mixed reviews and pretty good box office, but soon it petered out, and never made it back to a mainstage since.

I have no idea how McBride and company Directors Greg MacKellan and Stephanie Rhoads pulled together such a uniformly explosive cast, but a dozen singers-actors-dancers — from Lucas Coleman in the title role to the miniscule chorus line of Catherine Gloria, Nicole Renee Chapman, and Ariel Leasure — seem to be consistently on fire, their performances creating a delightful show where anything less than that would fall flat.

Thanks to owner DC Comics' refusal to allow use of characters other than Superman and Lois (acted and sung expertly by Jen Brooks, who is also dance captain for the company), the musical introduces a new nemesis instead of Lex Luthor: it is Dr. Sedgwick, a demented scientist, brought to hysterical life by Darlene Popovic. She is so evil you may just get hurt from laughing. 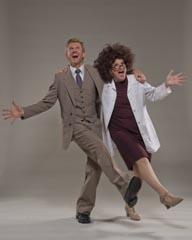 There is self-besotted, scheming columnist Max Mencken, whose songs and dances are among the highlights of the show in Brent Schindele's outstanding performance. Trevor Faust Marcom plays Jim Morgan, Lois' substitute love interest (I doublechecked if TFM is really the actor, not the character; it sound much more theatrical than Morgan). Safiya Fredericks and Diahanna Davidson turn in major performances in relatively small roles.

Music director Dave Dobrusky on piano and keyboard, Nick di Scala on woodwinds constitute the orchestra, worthy of the name, playing up a storm. 42nd Street Moon ticket prices are modest, even if the product is anything but. Head to the Eureka Theater before Superman flies away all too soon, on Oct. 20.