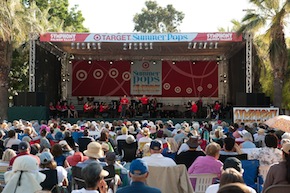 This is one of the Bay Area’s largest free music festivals, spread over two weekends and a huge lawn.

It may be one of the last Norman Rockwell moments left to enjoy this summer. Or would you say, a last Luncheon on the Grass moment, albeit without the naked lady. Or else think of it simply as a kind of public exhalation after weeks of bad news. A chance to sigh, soar, and re-believe. No tickets, no vendors, no booths. And if you want a bottle of water, that’s free too! And at Sunday concerts, free ice cream. Chocolate, strawberry, orange sherbet; the estimate is 3,000 scoops per show. Incidentally, although liquor is prohibited on campus, we’re told that if you bring a bottle of wine at the bottom of the picnic basket, no one will say no. Enjoy, relax, listen to a little night music.

Regular festivalgoers will tell you this one of their finest memories from summer. “If you ever wanted to see America’s melting pot, this is it,” Symphony Silicon Valley President and General Director Andrew Bales told us. “From babes-in-arms to octogenarians, and in every color of the rainbow, and they’re all having a good time listening to the same thing.”

Maestro Peter Jaffee leads the festival’s opening performance of popular classical works written for strings only. Jaffee is six-foot-six, and as Bales notes, “once you’ve seen him, you’ll never forget him. He’s a bit of a jokester and people love it. He has great fun with the music and getting the audience involved.”

“If you ever wanted to see America’s melting pot, this is it; from babes-in-arms to octogenarians, and in every color of the rainbow.” — Andrew Bales, General Director, Symphony Silicon Valley

Opera San Jose founder Irene Dalis, 87, relinquished control of the company a few months ago and appointed her successor, Larry Hancock, who takes over this month. He’s been with OSJ for 30 years and now has joined with the Symphony Silicon Valley Festival to present some of the company’s resident artists singing favorite arias and American musical classics like “If I were a rich man” from Fiddler on the Roof and “Summertime” from Porgy and Bess.

There are maybe three world-class mariachi bands in the concert world. This is one: a 14-member group and, on this particular evening, a showcase of rising stars. Presented with Viva Fest and led by Jose Hernandez, who founded the group in 1981. These are virtuoso musicians playing standard fare but also some special arrangements, including one a Glenn Miller favorite. This group is highly respected: The Association of California Symphony Orchestras is having their annual conference in Santa Rosa later this month, and the featured performance is Mariachi Sol de Mexico.

Beatlemania was the equivalent of Lisztomania as well as a Broadway musical that ran from 1977 to 1979, and then, after a lawsuit launched by Apple Corps, stopped and started and keeps going on in different venues around the world. Classical Mystery Tour is a semblance of the musical, and was organized by the same person who organized the original production. So it’s the Fab Four in their original personas and dress backed up by the 60-member symphony.

The festival closes with the music of Cole Porter; from “All of You” to “You’re the Top.” Led by conductor, composer and arranger Larry Blank, the Symphony is joined by Broadway talents Lisa Vroman, David Burnham, and Christina Saffran. You may remember Vroman, the lyric soprano, from her record-breaking five-year run in San Francisco as Christine Daae in The Phantom of the Opera. The program includes all those great songs made popular by, among many others, Ella Fitzgerald.

The festival can be reached by public transportation including buses, Cal Train and local light rail. There is also parking on the university grounds. Last year it drew 25,000 people. Concerts last 75 to 90 minutes. Some chairs are provided. Best to get there an hour or so early.