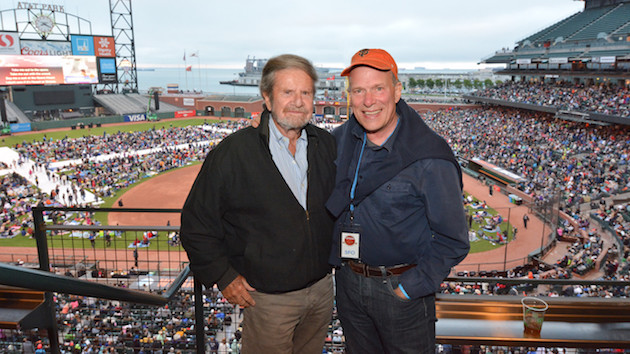 On Saturday, July 2, at 7:10 p.m., the San Francisco Giants will play the Arizona Diamondbacks in Phoenix at Chase Field. Samardzija v. Archer. Twenty minutes later, at AT&T Park, the San Francisco Opera will also play. Jose v. Carmen. Escamillo, ever the closer. Two different versions of the boys of summer. 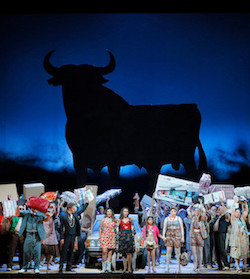 And of course not just any Carmen, but Calixto Bieito’s Carmen, which comes with industrial-strength noire.

More than 30,000 people are expected to watch the simulcast, coming from the War Memorial Opera House — where the tickets that night run to $381. At the ballpark the show is free; pay only for hot dogs, peanuts, and garlic fries.

And so baseball as a portal for opera, which is all part of David Gockley’s populism mantra. But now after 10 years the general director is leaving. He’s become interested in other dramas. Sailing for one.

We spoke to him about the AT&T simulcast, and also about ‘populism’ versus modernism.

In Search of Simulcast

Gockley’s original hope had been to simulcast operas to cinemas, but that didn’t work. It was 2006. The reason was distribution; the Metropolitan Opera had captured the three largest distributors with exclusivity agreements.

“What was left for our distributor were places that were remote and inconvenient, not to mention the Met tradition of Saturday afternoon concerts, which were morning, our time. Our distributor estimated that we would do much better than we did.”

“Unlikely,” said Gockley, “but we do want to get our material out there and available to people around the world. It’s most likely to be a streaming site — whether free or per view or subscription, like the Met’s. We have all this material, 80 productions, including some real treasures.

In May, 2006 Gockley experimented with a simulcast screen in Civic Center Plaza. He tried twice; once with Madame Butterfly and then Rigoletto. But both times the weather was wind, rain, and dank. It was then that a staff member suggested the ballpark. That worked, and continues to work despite acoustic problems in certain parts of the stadium where for a nanosecond you may hear an echo.

The first simulcast at the ballpark was Samson et Dalila in 2007, which attracted an audience of 16,000. That doubled with Aida the next year, and then a year ago Figaro drew 30,130. Gockley hopes to break that record with Carmen.

“This is a pattern that I’ve followed all of my career. I’ve always had a very populist attitude towards making opera available. Certainly, they’re not going to hear it on prime time Sunday evenings on TV like I did.

In a couple of recent interviews, including one in The New York Times, Gockley has sounded a bit sullen about the future of opera, particularly when it comes to Modernism. “Something that I’ve been pilloried for is that I’ve said Modernism has failed the mainstream opera establishment, at least in the U.S.A. I think it’s too intellectual, it’s too unattractive to the ear. So obviously I’ve tried to steer the new pieces away from that.”

Asked about the depth of his pessimism, he replied. “Well, it’s certainly concern for the future given the trends that I have seen over time. And that is the lifestyle change against subscription and more toward single ticket attendance, the lack of bankable stars, the lack of a musical education (which is now beginning to change thanks to federal mandates), and the fact that the competition is stiff and omnipresent.”

He went on to say, “two decades of rap, hip hop, and belting rock music have not done us a service; it has characterized music and singing in a way that takes people away not toward opera.  On the other hand, I’ve always thought that classic Broadway took people toward opera with that particular kind of vocalism and stories, and the acoustic chorus. Now, everything is miked, belted, and that’s taken the vocalism and the instrumental sound that people are exposed to on a regular basis away from the operatic ‘sound.”

But isn’t this the future?

“In the wake of Hamilton, inevitably there will be a rap opera, and no doubt some of the younger crowd may like it and yet our predominant audience will despise it. So you can’t win; you try to evolve the art form further ahead but the majority of the audience holds it back.”

Gockley noted that this is the great advantage of a small space like the Taube Atrium Theater at the Wilsey Center  —  “you can do new things for a portion of your audience that may be susceptible to new things without having to drag everybody else through it.”

If Modernism is the wrong direction, what’s the word that might describe a better direction?

“For 3,000-seat opera houses. the signature success in my time has been Moby Dick, which had the musical content, the libretto, and a big and very impressive physical production. I’ve characterized [Jake Heggie’s] work, or Jake himself, as being a ‘neo melodist’, and which I thought of again after hearing the music from his next major piece, It’s a Wonderful Life.”

He paused, and then added in his ever-dry way, “and that set me on the path that will damn me….”

“The dual path,” he explained. “One of which is minimalism. Meredith Monk, Philip Glass, and John Adams, although he’s gone beyond minimalism and created his own language.

“The other path are the neo-melodists, or melodism, or whatever you want to call it. Carlyle Floyd’s Susannah, and Stewart Wallace with Harvey Milk and Bonesetter[‘s Daughter], and Daniel Catan for Florencia en el Amazonas and Salsipuedes, Christopher Theofanides for Heart of a Soldier; Mark Adamo for Little Women., Lysistrata, and The Gospel of Mary Magdalen. All that stuff. Leading up now to Bright Sheng, a re-go at John Adams, which was announced in the last week, and more Jake Heggie.

“That’s enough not only to damn you but send you into the burning fiery pit forever.”

“Forever,” he repeated, and then a long pause, so long that it seemed the conversation had come to an end. “But I will have followed my instinct and my values as much as I could and I did not cave in to what is chic.”

He gave George Benjamin’s Written on Skin as an example. “I saw that twice, once in Munich and once in Aix-en-Provence, and I just thought that it was just more of the same and if I presented that in a 3,000-seat opera house people would run to the door. In a smaller venue, with a chicer public, it might work, but I’m not dealing with those denominations.” 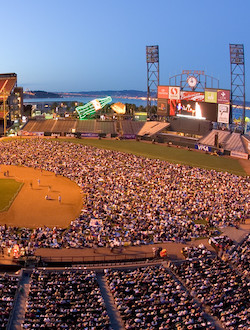 Last question, what’s the resonance between baseball and opera? What’s the populist link? As an aside, Gockley confessed he’d become distracted by the Golden State Warriors run for a second title, but now he was “rededicating his consciousness to baseball.” He has tickets to two games in the next ten days.

As for a resonance between opera and baseball, “most people think they’re both too long. And so baseball is trying to find ways to make the game go faster. I think my successor should find ways for opera to go faster.

“I was happy — and I think it worked — from a musical point of view, Bieito’s Carmen, without all the recits [recitative] and connective tissue. It was the fastest Carmen on record, at two hours and 46 minutes, or whatever it was. I think that served the art form — in terms of building an audience for the future as opposed to gradually depleting it.”

The July 2 Carmen simulcast marks the 14th free simulcast presented by San Francisco Opera and the 10th at AT&T Park.

Although Carmen at the ballpark is free, only registered attendees with printed confirmation will be allowed early entrance for best seating beginning at 5 p.m. Field seating will be available on a first-come, first-served basis. All others who have not pre-registered will be allowed to enter AT&T Park beginning at 6:00 p.m. No lawn chairs will be allowed for field seating, and glass containers, alcohol and hard-sided coolers are not permitted into the ballpark. AT&T Park in San Francisco is easily accessible by public transportation. For complete details, please visit sfopera.com/simulcast.