In July of 1963, as a would-be journalist just graduated from high school, I was offered what was probably a once-in-a-lifetime opportunity by my hometown paper, the Bar Harbor Times: help cover the total eclipse of the sun, whose path passed over the State of Maine. Now, just after celebrating my fiftieth high school reunion back there, I’m up for an even rarer experience: previewing the world premiere of Tobias Picker’s new opera, Dolores Claiborne, whose apotheosis is set at the time of that same eclipse, on a fictional island located — according to the foreword in the source novel by Stephen King — “in the Atlantic about sixteen miles from Bar Harbor”. This set of circumstances isn’t likely to happen again. 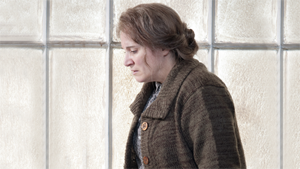 But indeed, there are other curious aspects to this commission from the San Francisco Opera, not the least of which is the sudden withdrawal from the production last month by mezzo-soprano Dolora Zajick, who found the title role of a feisty Down East wife and mother “more challenging physically and vocally than I had anticipated”, as she announced in an SFO bulletin.

Zajick was quickly replaced by soprano Patricia Racette, who happened to be in town singing Margherita in SFO’s season opener, Arrigo Boito’s Mefistofele, and who also happened to have performed roles in two previous operas by Picker, one of which, the title role in his Emmeline, from 1996, happened to have her depicting another native of Maine.

Born to be Good and Bad

In an interview before a tech rehearsal, Racette characteristically asserted the benefits of her concurrent SFO bookings. (Catherine Cook will replace her for the final two days of the Dolores run.) “The difficulty, musically and vocally, of Dolores is offset by the opulence and beauty of the Boito,” says Racette. She’s already been praised by Bay Area critics for enhancing the Mefistofele, production which, she says, “is kind of a musical vacation from the edgier and more raw telling of a story” in Dolores. “And this shows my range”, she continues. “If you look at my repertoire as a soprano, I’m usually playing the victim, the damsel in distress, and I kill myself or go crazy or whatnot. The mezzos so often get the fun, juicy stuff, where they get to misbehave and just speak their mind in a non-innocent way.”

“[My lead characters are] strong women who make choices and have to live with them. They go their own way; they don’t do what society expects of them.” — composer Tobias Picker

Racette’s assenting to step in for Zajick was easy, she says. "The circumstances here are so specific: my loyalty and love for this town, this company, and this public, and David Gockley’s always been such a supporter of mine." "It’s another benign circumstance that Racette’s upbringing in the town of Bedford, New Hampshire, not far from the Maine border, has prepared the singer to “understand the emotional palette of this kind of person. I’m incorporating every viable detail I can. So I say, ‘Joe Sint Jawge’ and ‘fawty yeaws’, not ‘Joe St. George’ and ‘forty years’. And when Dolores loses her temper and smashes [her abusive husband] Joe over the head with the pitcher — picture a Sicilian doing it, then picture a New Englander doing it, there’s just a different kind of gesticulation, of tone. And when you have a sense memory and an idea of these places, I think it just automatically adds more to what you bring to the character.”

Picker arrived in San Francisco shortly after the casting change was announced, and found that Racette’s higher tessitura demanded little change to the score. “There are just a few little details in some of the voicings,” he points out during rehearsals, “and because she’s learning it very quickly, I’m putting in a few little signposts for her in the orchestration, to give her her notes.” Is Dolores unusually challenging to a singer? “It’s a lot of singing; she’s onstage in almost every scene,” Picker allows. His lead female roles have tended toward “strong women who make choices and have to live with them. They go their own way; they don’t do what society expects of them.”

The composer became acquainted with novelist Stephen King and Dolores after viewing the 1995 film based on the novel, directed by Taylor Hackford (a double-Oscar winner for Ray) and starring Kathy Bates as Dolores, David Strathairn as Joe St. George, and Jennifer Jason Leigh as the couple’s grown daughter, Selena. “I wanted to use something from King, because I recognized that he is one of America’s greatest storytellers,” says Picker. “He has an understanding of inner motivation and psychological conflict.”

Picker had awaited a collaboration with SFO general director David Gockley ever since the two were employed in Houston in the 1980s, Picker as composer-in-residence with that city’s Symphony and Gockley as general director of the Grand Opera. (Picker now holds the post of artistic director of The Opera San Antonio, which a year from now will enjoy its inaugural season in a new state-of-the-art performing arts center.)

A few years ago, Picker contacted J.D. “Sandy” McClatchy, who’d written the libretto for Emmeline and also worked on several other operas. “He said, ‘I have a project’, and it was Dolores Claiborne, which is not what I was expecting, but that’s usually a good sign,” says McClatchy, by phone from his Connecticut home. “I hadn’t read the novel, but I did, and I saw the movie, and decided not to follow it — it strayed a good bit from the novel.” King “took no interest” in the operatic project, but “was very generous about letting it happen”, and granted rights to use his work for a dollar.

“The fact is, I get to speak my mind, and not feminize it to the point where it’s all flowery, which we typically see in opera.” — Patricia Racette

McClatchy and Picker open the opera with a scene, set in 1992, of the death of Vera Donovan, Dolores’s rich and imperious employer, and then proceed to the inquisition of Dolores, who’s accused of murdering Vera. Ensuing scenes flash back to the 1960s to depict Joe’s physical abuse of Dolores and his molestation of the teenaged Selena, the mother’s frustrated attempts to bond with and protect her daughter, and the unlikely guidance Dolores receives from Vera, leading to the eclipse and a fateful act of vengeance. By the end of the opera, mysteries are unraveled, even if not all feelings are resolved. “I like the idea of standing certain standard melodramatic conventions on their head,” says McClatchy. “Emmeline was left alone, Dolores is left alone, but so are we all, I think.”

McClatchy describes Picker as “a traditional composer”, incorporating arias and small ensembles and a small amount of choral work (primarily Vera’s posh parties and the crowd assembled for the eclipse), and “moments that sound like they could be chamber music”, as the composer puts it. “Mahler liked to do that too, the contrast of the small against the large”, he points out.

“Dolores’s music all comes out from a very small cell, based on the initials of her name, ‘D’ and ‘C’, just as Vera’s and Selena’s music comes out of the letters of their names,” Picker continues. “There’s this C-minor chord which comes throughout the opera, and that’s ‘Claiborne’, that’s her, dominating the entire story. The audience won’t know, unless they’re told, or if they have perfect pitch. But they might wonder why Selena is always preceded by an A-minor triad.”

For McClatchy, who was feted at Litquake this week and was celebrated as a poet long before he became a librettist, there’s poetry in “the arias, the big aria for Dolores in the ferry scene, and for Selena in the eclipse scene. The opera tends to stop in those moments, and there’s much more self-conscious attention paid to language at moments like that. The task of a poet is to shoot for language at its most condensed and intense, to make the most of metaphor, to look for patterns. Though as a wordsmith, my first duty is to get out of the way of the music.”

Getting to the Raw Truth

But Dolores is as remarkable for the neo-verismo crudity of its language as for its poetry. “‘Sometimes being a bitch is the only thing a woman can do’, that’s straight from the book,” McClatchy notes. “There was a discussion early in production, and we decided not to take it out. The language is a little raw, because the story is.”

“‘Sometimes being a bitch is the only thing a woman can do’, that’s straight from the book. The language is a little raw, because the story is.” — librettist J.D. McClatchy

“I’m getting to play a salty, bitter woman, and that’s going to make for interesting characterizations,” adds Racette. “We get to see a side of [Dolores] that I rarely, in my 19th-century repertoire, get to experience. I get to sing ‘shit’ and ‘bitch’, and the fact is, I get to speak my mind, and not feminize it to the point where it’s all flowery, which we typically see in opera. And as American opera singers, we don’t often get a chance to tell our own American stories, from our own regions.”

In expressing herself as Dolores, Racette has been reminded that Picker “tends to write in the extremes of the voice. It’s not like doing Puccini, where you know there’s something of a formulaic treatment to the vocalism. I knew I was going to be doing some vocal athletics.”

David Strathairn, who turned out to be a neighbor of Picker’s in Rhinebeck, New York, remembers the perverse Joe as a disturbing challenge to an actor, but he’ll be coming west to see the musical version of the harrowing story (and, later this fall, to star in an American Conservatory Theater production). Kathy Bates confided to the composer that she considers Dolores to be her greatest filmic role. For his part, Picker is excited to bring a new strong female figure to the operatic stage. After all, he says, we’re likely to see a woman president soon.