Tenors historically have been in short supply, so the scene at the San Francisco Conservatory of Music Thursday evening was a big surprise: five (5) talented tenors led the way at the Voice Department recital. The event was strange in other ways, not counting the lamentably empty 400-seat concert hall — something that happens all too often, unfortunately, but shouldn't if the school made greater effort to attract audiences to free events. 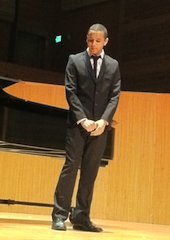 What was highly unusual: the length of the concert. Given 15 young singers the opportunity to perform, how long would you expect the event to last — 15 times 10 or 15 minutes? In fact, it was all over in less than an hour, some selections running under a minute. Strange, indeed.

- Chris Coyne, singing "Anges du Paradis," from Gounod's Mirelle. Another striking lyric tenor, with fine diction, passionate delivery, a bit of a ping to the voice enabling it to go beyond the strictly lyric literature.

(The reason for repeated recognition here for diction is that it is one of the most frequent problems for singers at the beginning — and some, alas, later on — in careers.) 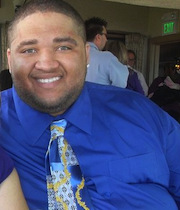 - Christopher Craig, singing Tosti's "L'alba separa dalla luce l'ombra." Big, secure voice, more spinto than lyric, but elegant, and with fine Italian. I asked him after the concert how he would classify the voice, and he wasn't sure — "I won't know until my voice fully matures" — but his teacher, Patricia Craig (no relation), places it "somewhere between spinto and dramatic."

The sophomore transfer student from Torrance, CA, hopes "to make a career of what I love to do, which is singing."

Beyond the bevy of tenors, there was an impressive mezzo — Amber Johnson, with an aria from Massenet's Werther — and a soprano: Laura Arthur, singing an affecting "Liebst du um Schönheit," from Mahler's Rückert-Lieder.