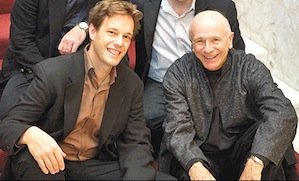 Great Scott, which will have five performances at its Dallas premiere, focuses on a fictional famous opera singer, Arden Scott. In the opera, Scott, who was recently profiled on 60 Minutes and is just a hometown girl at heart, returns home for the first time since her rise to fame to undertake a tricky role in a forgotten bel canto masterpiece, Rosa Dolorosa, Figlia di Pompei (Rosa Dolorosa, daughter of Pompei). Not only does she star in a grand opera that includes two mad scenes, an erupting volcano, a children’s chorus, and a corps de ballet, but she also finds herself immersed in an opera not of her choosing.

“Every conceivable disaster awaits them,” McNally explains in the announcement. “Will mere human resources be equal to the opera’s inhuman demands? The rehearsals and performance of Rosa will mirror the upheaval of Arden Scott’s own life.”

The announcement came during celebrations marking the limited release of a CD of excerpts from the Dallas premiere of Moby-Dick, San Francisco composer Heggie’s second full-length opera to a libretto by Gene Scheer. The recording includes about half the opera and is meant to provide a glimpse of what happened at the premiere.

Earlier today, in its season announcement San Francisco Opera confirmed that Moby-Dick’s Bay Area premiere will take place in the War Memorial Opera House next Oct. 10, two and a half years after its Dallas opening. SFO’s production will feature many of the same cast members as at the premiere, as well as its conductor, Patrick Summers.

In an exclusive interview with SFCV, Heggie expressed delight that virtually everything you can imagine happening onstage, backstage, in rehearsal, and in the diva’s life will take place in Great Scott.

“What appeals most to me about the opera is that it’s a quest for identity and a transformative journey,” Heggie says. “Here is the most famous singer in the world, but can you really have it all at the same time? Can you be a famous artist or a great lawyer or a great teacher or writer, and whatever, and still have the best of everything else in your life, too? Where do you make sacrifices? What choices do you make, and how do they influence you in your journey?”

Lest that sound much too serious, Heggie notes how happy he is that the opera will give his collaborator, McNally, room to include his “signature brand of humor and drama at the same time.

“Terrence has had a lifelong love affair with opera, and he knows it very, very well. He has an immense recording collection, has gone to opera all over the world his entire life. His great plays always include opera references, or they’re about the opera. He’s ideally suited to write a very human story that capitalizes on all the strengths and weaknesses that come out when people try to do superhuman things.”

TDO has signed a rapidly emerging young maestro, Evan Rogister, to conduct. Heggie and Rogister first met when the latter was the assistant conductor of Dead Man Walking for Summers in the Baltimore production.

“Patrick was so impressed that he created a position for him in Houston,” says Heggie. “Then he became Donald Runnicles’ assistant conductor in Berlin the past two years, and went on to conduct Bluebeard in Seattle and had a triumph there. He’s a really great guy, a really great colleague, and an incredible talent. We’re very lucky to have him early on in his career.”

Heggie is equally excited by the enormous challenge of creating a bel canto opera within the context of a contemporary opera that references current-day music and events.

“It’s a wonderful opportunity,” he remarks, “and one I’m certainly eager to embrace. It’s a chance to really explore the dramatic contrast and commonalities between our time and the time of bel canto opera. As long as bel canto has been around, people have been imitating people from centuries before. In other words, people are always people, whether you’re onstage or not.

“When I write music of our time, it contains a lot of jazz, rock, pop, and folk influences, as well as all the traditional opera influences that I love. Creating a bel canto opera within a modern opera is gonna push me. I don’t want to keep writing the same thing; I want to be pushed. I don’t take a project unless it pushes me. And it has to terrify me a little bit. I have to feel I can accomplish it, but I have to wonder how the hell I’m going to do it.”

The sheer deliciousness of the opera’s scenario, with its infinite possibilities for drama and mischief, is only one of its potential strengths. Central to its success is what Heggie describes as McNally’s ability to recognize ironic humor in extremely funny situations, including some that might go unnoticed were they not exposed to his playwright’s eye.

“He knows how to put it forward without condescending to the opera world that he adores,” says Heggie. “It’s a perfect project for him.”

Equally important is DiDonato’s partnership. “She’s been so supportive from the beginning,” says the composer. “She’s a person who respects the creative process immensely and is willing to be there when we need questions of her or to just stay out of the way. Knowing that we have her confidence and commitment early on gives us immense freedom.

“It was like when I started writing Moby-Dick and knew that [lead tenor] Ben Heppner was committed before I’d even written a note. I could write with so much more confidence because I really knew whom I was writing for. Knowing that I have Joyce’s confidence, commitment, and support — you can’t ask for a greater gift.”