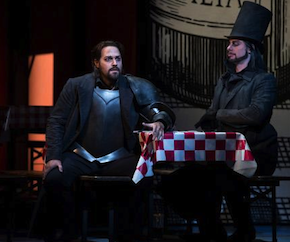 For a few more days, Laurent Pelly's new Covent Garden production of Meyerbeer's rarely-performed Robert le diable is available for free streaming on BBC. The program runs almost 5 hours, duration of the opera itself is 3 1/2 hours.

Merolini Bryan Hymel (who is expected to appear in the Met's production of Berlioz' Les Troyens, replacing Marcello Giordani, see next item) and John Relyea appear as Robert and Bertram, respectively.

The story: Robert, Duke of Normandy, father of William the Conqueror, was so notoriously cruel that he was regarded as the son of the devil. The opera places the story in Sicily, where an exiled Robert, accompanied by the mysterious Bertram, is trying to regain fame, fortune, and the hand of the beautiful princess Isabelle. Robert is pursued by his childhood friend Alice, who is trying to deliver to Robert the dying words of his beloved mother, and her minstrel fiancée Rimbaud... and so on.