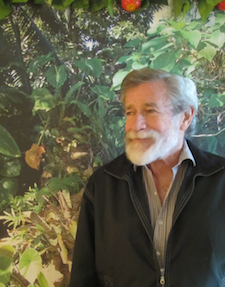 In the mellow comfort of their Berkeley Hills homestead, Don and Nannick Buchla are showcasing the electronic instruments they’ll be bringing to their performance across the Bay for the first concert of this year’s Other Minds Festival of New Music.

“You wanna show us some of the things you can do with the Piano Bar?,” Don Buchla asks his wife rhetorically. He’s referring to a device he invented about 10 years ago, which is positioned over a standard piano keyboard and can convey MIDI (musical instrument digital interface) information to a control module or sequencer. For Nannick Buchla, the Piano Bar will provide the broad acoustic spectrum on which she’ll accompany her husband in the American premiere of his multimedia composition Drop by Drop, on Feb. 28th.

“Because I play with Don, I try to avoid melody, avoid rhythm, and avoid harmony — but it’s very difficult for me,” says Nannick, with her native French inflection and a laugh. She’s the classically-trained granddaughter of famed French pianist Céliny Chailley-Richez, long associated with Georges Enesco. But for now, her nimble fingerings are eliciting sounds programmed by Buchla and unfamiliar to the classical concert hall.

The sounds are arrayed under working terms such as cat’s meow, birds, bats, castanets, and waterfalls, changed from one to another by the turn of a knob. But these terms don’t begin to suggest their evocative delight and the subtleties afforded the player. “We don’t pay attention to the sound enough,” Nannick points out about the experience of many performers on traditional instruments. “But when sound becomes your priority, and you have so many possible sounds, it’s infinite, and a totally different approach to music.”

Don Buchla explains the operation of the Piano Bar as an optical device, with photo cells over each of the piano’s keys. The cells detect the minuscule vertical movements of the black keys, and reflections off the white keys, so that variations in touch result in variations of sound.

“When sound becomes your priority, and you have so many possible sounds, it’s infinite, and a totally different approach to music.” — pianist Nannick Buchla

Downstairs in his basement studio, Buchla demonstrates his 200e modular synthesizer, which he himself will man next week at the SF JAZZ Center, the site — for the first time this year — of the 19-year-old Other Minds Festival. The 200e is evocative of an old PBX telephone switchboard in size and in the proliferation of patch cords, which together with rows of knobs and switches allow an informed user to synthesize a seemingly unlimited menagerie of sounds and effects, technically referred to as patches. A pad with a set of contiguous trapezoidal keys provides for tactile input, not totally unlike the Piano Bar but with greater variety. Buchla notes that Drop by Drop will involve, aside from the electronic instruments, a projected video on a theme somewhat related to the water cycle.

“There will be five movements in the piece, starting with drops, which turn into waterfalls as they increase in density, and gradually turn into clouds,” says Buchla. “Then, some birds fly out of the clouds, and we’ll hear an electronic representation of birds.” (Pressing one of the keys, he produces a celestial whistle.) “For this particular piece, I’ve put in about seventeen [different] patches ... All I have to do to call up another patch is to push a button, and all of the knob settings are changed. I can [also] override sounds ... and I have the choice of reconfiguring the whole system, if I get a new idea.” In the performance at SFJAZZ, Nannick Buchla’s keyboard work will react to both the video and the emanations from the 200e.

Buchla began infusing new ideas into music not long after he graduated with a degree in physics from UC Berkeley in 1960. He found like minds close by at the San Francisco Tape Music Center, founded in the early 1960s by composers Morton Subotnick and Ramon Sender, with input from Pauline Oliveros. “I was borrowing the Center’s three-track tape recorder,” Buchla recalls. “I only had a one-track Wollensak, and I wanted to do mixes. They were working with electronic music, but they weren’t using any instruments. And I proposed making an instrument for music, specifically, and not just an adaptation of a laboratory instrument. I talked with Mort, he liked the idea, and they helped me design a system.” 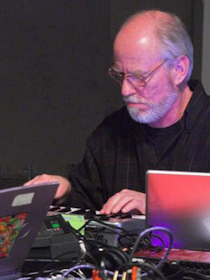 The result, dubbed the Buchla 100 series, began selling in 1966, and Subotnick made use of it on his Silver Apples of the Moon in 1967, the first electronic work commissioned by a record company (Nonesuch). Buchla found himself in competition, of sorts, with Robert Moog, a New York-based Ph.D. who’d hooked a synthesizer up to a keyboard in 1964, and had attracted major attention after his invention was showcased on Wendy/Walter Carlos’s popular Switched-On Bach LP (Columbia, 1968).

“He was much more of a commercially-oriented person than I am,” says Buchla of Moog, who passed away in 2005. “He was surrounded by East Coast universities, where there was a level of conservatism involved. I was with UC [Berkeley], where in the Sixties we were staging protests, and I created instruments for expressing my feelings and musical ideas.”

Buchla started the 200 series, dubbed the Electric Music Box, in 1970, and later incorporated digital control, microprocessing, video, and MIDI. One of his original 100 series units ended up at Mills College, along with several of the San Francisco Tape Music Center’s innovators (including Oliveros and Steve Reich). John Bischoff, a composer also featured on next week’s Other Minds Festival opening program and a teacher of computer music at Mills, was a graduate student there in the early 1970s, when he learned to appreciate Buchla’s contributions to new music.

“I think of composing as trying to prime the medium, to goad it, and to get it to speak back to me.” — composer John Bischoff

“I could have done my work on the Moog, which they also had at Mills, but I found the Buchla to be more open to the idea of building patches where the machine was automatically varying its own behavior,” says Bischoff, another long-time resident of Berkeley. “You make this thing which you’re not completely controlling, it has a certain autonomy.”

Bischoff himself emerged as an innovator with the League of Automatic Music Composers in 1978, considered the first computer network band. But he’ll be performing solo, with a laptop, at the SFJAZZ Center, presenting two short pieces which “both use a sound source external to the computer. In Audio Combine, there’s four acoustic objects: a toy chime, a music box, an ukelele, and a hand drum, which are amplified. The computer responds with its own sounds, which are correlated in some way, and I hear what the computer is doing, and it affects what I’m doing, which in turn affects what the computer is doing. Surface Effect works with an analog circuit I built, two little oscillators that are played in an unusual way.”

Bischoff thinks of his approach as “trying to open the computer up. Instead of the computer being this self-contained universe that’s completely controlled, you’re injecting contingency and variability. So you’re building a larger system that ties into the social fabric of human sociability, and into acoustic sounds that have variability and contingency, and don’t always sound the same.” He relates his approach to that of his father Elmer Bischoff, a Bay Area-based abstract painter who, like his contemporary Richard Diebenkorn, found his way back to figurative art. “If you see an abstract painter facing a white canvas and putting some paint on it, hoping some dialogue starts, and then going where the painting starts speaking back, it’s this back-and-forth, and I think of my composing as that,” says Bischoff. “I think of it as trying to prime the medium, to goad it, and to get it to speak back to me.”

Buchla is pleased that, over time, “people have come around” to a greater appreciation of both electronic and computer music, as evidenced by Other Minds’ successful offerings. But it’s vital to veteran innovators to avoid what Bischoff refers to as “the implied danger of things being trapped in the computer, and being overly controlled.”