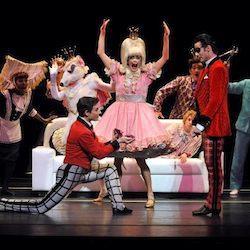 It was Charles Burns who inspired Mark Morris’ bizarre adaptation of The Nutcracker. Burns, one of the masters of elipitcally told graphic stories, said once in an interview, “My interst is really in the idea that the characters are manifesting something physically that’s inside of them.” In his famous work, Black Hole, one of the characters sheds her skin “like a snake.”

Transformation is always one of his themes. Morris took Burns’ comic feel, and noir sensibility, and staged The Nutcracker in 1960s America, and then added his own subtle and not so subtle references to materialism, homosexualty, and transformation. He is faithful to the original story, written by E.T.A. Hoffman, who was, after all, an author of fantasy and horror himself. The only thing missing is the sugar plum fairy.

At Cal Performances, the Mark Morris Dance Group with members of the Berkeley Sympony Orchestra, conducted by George Cleve, along with the Piedmont East Bay Children’s Choir, directed by Robert Geary. Through Dec. 23 at Zellerbach Hall. Box office: (510) 642-9988.