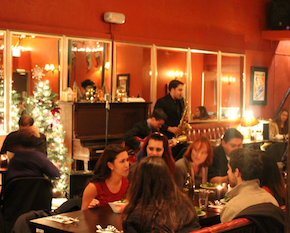 The SFJAZZ Center has opened: Praise be the lord. It’s in Hayes Valley at the corner of Fell and Franklin. Season one is now underway. Opening night was Wednesday, featuring Joshua Redman. McCoy Tyner plays tonight, Bobby Hutcherson on Sunday. Jazz in Baghdad-by-the-Bay has rarely been more vibrant.

SFJAZZ, which incidentally has lots of money, muscle and ambition in its foundation, has big plans. It’s a broad-based community initiative that goes well beyond concerts and courses. In the coming weeks we’ll explore some of the offerings, but for the moment here’s one of the jewels in the box.

There’s a place called The Old Skool Café out in the Bayview. Opened last April, the brain child of Teresa Goines, a former corrections officer, who came off the tiers with the revelation that a lot of kids wouldn’t get into trouble if they had money, if they had a job. So she opened up a restaurant in her house, and then here and there, and then eventually she found a one-time church. It’s a little Cotton Club on a nervous street called Mendel. The café is the face of a “faith-based, violence-prevention program” focused on at-risk kids, 16 to 22. They need jobs, but of course they need much more than that, not least a place that’s supportive and straight-up. It reminds you of Mimi Silbert’s Delancey Street Foundation and Restaurant. 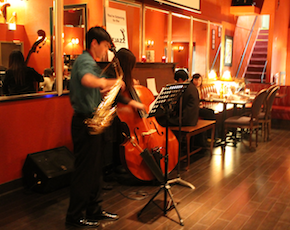 That’s the mission; the manifestation is a 1940s-style, supper club, of, by, and for youth. Swanky red leather booths; chandeliers; waiters in crisp red shirts, black bow ties, trousers suspended, topped with a red fedora. Twenty-one kids on the staff, serving highly regarded Southern style food. And then entertainment; everyone gets into the act, the waiters as well as the entertainers. Everyone tells their story.

So along comes SFJAZZ, which has lines out to young jazz musicians from all over the city looking for venues. A match made in heaven. Is this not how you revitalize a community.

We talked to Laila Smith, an 18-year-old intern with SFJAZZ who’s also a singer and performs at the café from time to time. SFJAZZ sends trios and quartets over on second Friday of every month (next is February 8). You’ll need a reservation.

“We have 35 kids that rotate to the performances,” Laila told us. It’s mostly 40s swing era music. A lot of stuff from the Great American Songbook.

Laila graduated from the Marin School of the Arts last year and is taking a gap year before college. She’s been singing since she was six.

“When I’m singing there I look out in to the audience and everyone just seems so happy to be there. I think the motto of the place should be come hungry, leave inspired. It’s genuinely one of the happiest places I’ve been to. It's a real community experience and when you hear the waiters in these monologues, telling these stories we all feel like we’re from the same place.”