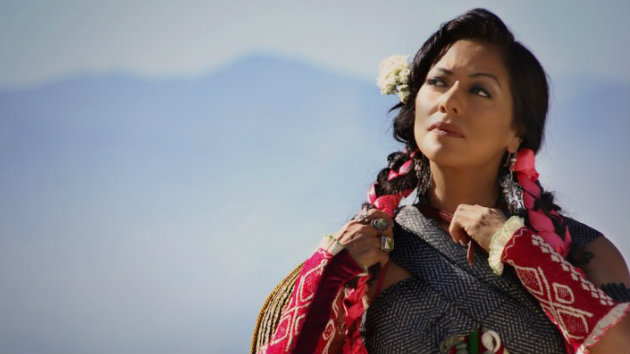 Lila Downs is the woman of “multiple voices.” As a New York Times reviewer once put it: Her voice stretches “from an airborne near-falsetto down to a forthright alto and a sultry, emotive contralto.” Downs, a Mexican-American, is also a fiery voice of political activism in Latin America and her songs are filled with the images and ironies of daily struggle.

These voices all came together recently with Downs’ debut with the San Francisco Symphony. The Dia de los Muertos program included songs from her new album, Balas y Chocolate. The album cover includes a mesmerizing photo of Downs, who is often shown to be sultry, distant, or bemused. But in this photograph, she brings another projection, that of a warrior goddess.

Downs grew up in Oaxaca and Minnesota, the daughter of Anatasia Sanchez, a Mixtec Indian who ran away from home to sing in cantinas in Mexico City. That is where she fell in love with Allen Downs, a University of Minnesota professor. Downs herself studied classical voice and anthropology at the University of Minnesota.

Her musical influences include the Ranchera music of Mexico; American and South American folk; blues; and hip-hop. “I write about what I see occurring in the world around me and right in front of me,” she wrote to us, “as well as my own personal journey as a human being. In this world there is a lot of love and pain, corruption and altruism, comedy and tragedy, exploitation and compassion. Art — whether poetry, music, painting, sculpture, or graffiti — has always been a vehicle for expressing the societal and human experience of the time, for better or for worse.”

Downs’ and her husband and collaborator, Paul Cohen, have produced 10 albums, earning both a Grammy and a Latin Grammy award. She is currently working in collaboration with Argentine singer, Soledad Pastorutti and Spanish flamenco singer La Nina Pastori.

Downs noted recently, in an article in El Tecolote, a San Francisco neighborhood newspaper, that during this year’s Dia de los Muertos she was honoring her grandmother and father, as the Mazatec curandera and shaman, Maria Sabrina, who died in 1985; and three of the 43 students from the Ayotzinapa Normal School who disappeared on September 26, 2014. Three have been confirmed dead; the fate of the others is unknown, but Downs did not include them in her ceremony, in hope they are still alive.