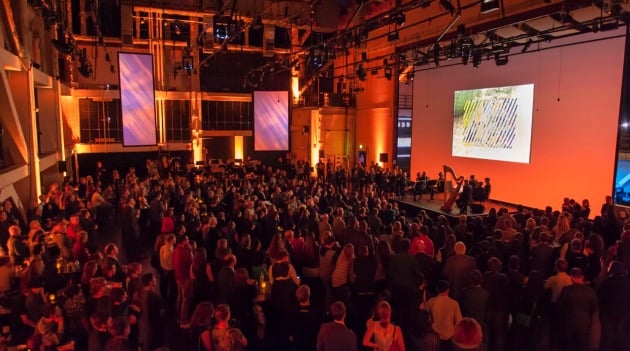 The new season at SoundBox began last weekend; tickets sold out two weeks earlier within six hours of being offered. SoundBox has become that popular: The little boite under Davies Symphony Hall, in through a back door, down into a still-used rehearsal hall is recast once a month as a club, with 50-foot ceilings, two stages, big screens, a bar, and a fire marshal’s limit of 500.

This is SoundBox’s second season. San Francisco Symphony Michael Tilson Thomas’s old pipe dream — which he lit 20 years ago in Miami, at the New World Symphony — has turned into a wildly successful experiment in audience development. So successful that it has challenged the popular paranoia that there’s no audience to replace the thinning blue-hairs; that the millennials, for one, have little appetite for live entertainment, much less classical music, and there’s just no way to pry them away from curated music streams and a behavior pattern that increasingly doesn’t include clubs.

That’s happening everywhere by the way. A marketing expert quoted last August in The Independent, the British daily, noted that in London the “large nightclub chains were faced with a challenge in creating a unique and photogenic experience: ‘Social capital is bragging about your experiences and putting them on Instagram or Facebook and the local nightclub is struggling to cut it when there’s so much choice out there.’”

But SoundBox is no ordinary club, and while its novelty may wear off, right now it has adopted the persona of a multimedia classical-music cabaret that’s hip, arty, diverse, and tuned to the social demands of people 40 and under. The real test over time may be whether the freshness of the experience can be maintained, and whether it can attract an audience that attracts its own audience — whether genuine cachet can transcend trendy.

SoundBox opened a year ago. Above all, it was designed to be a “social experience,” a quality that the ‘mainstage’ at Davies Hall doesn’t offer, except during intermission. The programming format in ‘the box’ is three 20-minute sets, with two intermissions. The question at birth was whether a mainstage performance, adjusted to a smaller environment, and with special amenities and programming, could withstand the freedom to talk, text, post, drink, wander around, and otherwise be only partly engaged.

Oliver Theil is the symphony’s communications director. “What we’ve found after our first season,” he told us last week, “is that because of the very visceral and intimate nature of the space, people weren’t on their cell phones, they weren’t getting up to get a drink, they weren’t fidgeting in their seats: In fact, they were almost as focused, if not more so, than during our mainstage concerts.”

And he added, “sitting five feet from a cellist performing a Bach suite is very different in a room for 500 than in a 2,700-seat hall…” 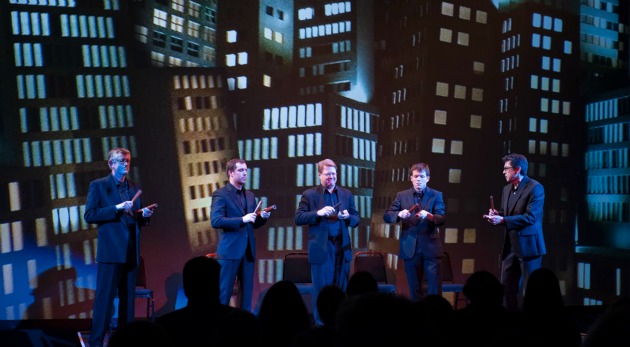 At SoundBox strategy meetings, the lingo term in play these days is not ‘freedom’ but ‘self-regulate.’ And so the idea is that you trust people to ‘self regulate’ and they will. From the beginning, says Richard Lonsdorf, Associate Director of Artistic Planning, there are no admonishments at the beginning of a SoundBox performance: “No guidelines; we just tell people where the exits are and then go for it.”

The range is roughly from Monteverdi to Cage, with an emphasis on solo instruments. And so, in the first season, MTT kicked things off with a round-the-world-and-through-history review of avant-garde music. And then there was a percussion concert, and Samuel Adams (John’s son) curated a concert called “Their Own Devices,” which featured Tristan Perich’s low-tech electronic music. Lisa Bielawa brought over a choral piece, which included singers from the San Francisco Girls’ Chorus spread through the audience.

The December 11 show, titled “In Descent,” is about edgy, sometimes surreal music  and includes: Schubert’s “Die Forelle” and Quintet in A major; Weill & Brecht’s “Ballad of the Drowned Girl,” “Surabaya Johnny,” and “Pirate Jenny”; Hindemith’s Kammermusik No. 1; Schulhoff’s Sonata Erotica; Ligeti’s ”Mysteries of the Macabre,” from Le Grande Macabre; and Laurie Anderson’s The Dream Before (for Walter Benjamin).

“We’re willing to challenge people,” said Lonsdorf. “But at the same time we can’t be so avant-garde that we lose them. It’s important to keep providing touchpoints. We also try to moderate lengths and tone. The most successful performances have been ones where we’re ramping up and down levels of dynamic intensity, ensemble texture, and musical styles. We’re constantly changing perspective, keeping people at the height of engagement. Above all, we don’t want to risk being monotonous.” 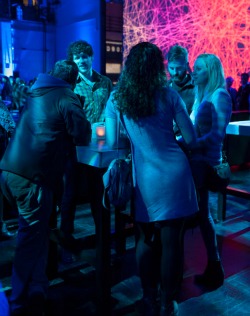 Lonsdorf, 31, says this experience with SoundBox may undermine the conviction among administrators that young people will never come to classical music concerts and that at the end of the day they’re not really voracious consumers of entertainment.

“What is true, I think, is there’s been a divergence of how they do it; younger audience demand more flexibility; they’re getting used to having more things at their fingertips, and we’re playing around with those characteristics. It’s too early for real data but anecdotally I can tell you we’re seeing new faces and to me that’s a victory. Our goal is to create a space that is welcoming and, above all, diverse.”

Midnight at the Oasis

Mary Goree is 40, and has lived all her life in San Francisco. She’s a rock ‘n roll booking agent, who places alternative musicians and bands at venues like the Great American Music Hall and The Chapel. Last April she was invited by a friend to go to SoundBox. She’d been to Davies Hall just once before, during a field trip in elementary school. Nor had she much experience with classical music.

“It was not what I was expecting” she said. “I was imagining rows of seats and just listening to classical musicians. But the first thing I noticed was a huge art installation. It was visually captivating and then you see that there are no seats, it’s cushions and couches.”

And at some performances, bean bags.

Goree found the audience to be between 25 and 45, dressed in high quality casual. She was especially pleased to meet people she already knew. The program included pianist Sarah Cahill, who she thoroughly enjoyed, but Goree was particularly drawn to the artistic use of film.

The experience led her to go to a mainstage performance, which was fulfilling. But what would it take for her to buy season tickets to mainstage performances? “It’s a hard question.  There would have to be things that piqued my interest. It’s such a different experience. I just felt like because of the visual art and the open seating SoundBox was more social. I don’t think I would feel comfortable talking to strangers. I’m shy in that way. I think that’s the difference: At SoundBox I felt totally at ease talking to people I didn’t know.”