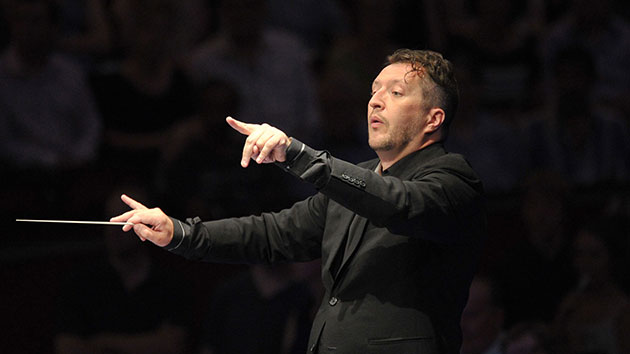 Maybe it shouldn't be surprising that when Thomas Adès was writing In Seven Days, he had to almost role play the supreme being. After all, the 2008 concerto for piano and moving image, which Adès will conduct and Kirill Gerstein will play with the San Francisco Symphony this weekend at Davies Hall, traces the story of Genesis.

Instead of employing purely musical logic to craft his concerto, Adès had to evoke in seven movements of music the events of one of Western civilization's primary creation myths. And it wasn't easy playing God, "particularly when I was starting on a new 'day,'" he recalled. "I've done the ocean, now I've got to do the trees, and I have no idea how to make this transition. I'd go to Tal and say, 'What have you got for the trees?'"

Tal was his artistic collaborator (and, at the time, life partner) Tal Rosner, the Israeli video artist. The pair constructed their audio-visual world incrementally, sometimes Rosner supplying Adès with an initial image, sometimes responding to the composer's musical sketches."Tal would say, 'I think I might have something for this,' and I'd go back to the score and the door would have opened. Then I'd write the trees and bring that back to Tal and he'd develop the visuals."

"The visuals in the piece are the result of an in-depth documentation of the recent regeneration of the Royal Festival Hall in London, threaded with footage and photographs of Walt Disney Concert Hall," Rosner explained. "The original pictures are rendered into complex narrative abstractions that introduce new figurative forms." (In Seven Days isn't site specific, though, having been performed successfully in various European venues, Boston, New York and beyond.) This genesis wasn't monotheistic.


Nor was it exactly the simple narrative structure described in the English translation of the myth. "The original Hebrew is slightly different," Adès explains. Instead of the world starting from scratch, there's a sense that "the void was not void, that everything was already there, but mixed up, topsy turvy, all clashing around, but they haven't fused. There's more of a sense that everything really unfolds."

But if creation wasn't a narrative that proceeded in seven orderly steps (heavens, earth, oceans, trees, etc.), followed by a day of rest, then another huge creative issue arose.

"There's always this big question in music: how you end your piece," Adès says. "I felt it wasn't quite true to the structure of the music to open it out into something new," that is, the universe that followed the creation. So he asked his partner what he thought. "Tal said this whole cycle would start again," Adès remembers, and the piece ends accordingly. "I hadn't arrived at that independently. I needed the visual side."

It's also not surprising that Adès found inspiration in visual art. Now 43 and widely regarded as the most important British composer of his generation, Adès was not only the partner of a visual artist but also the son of an art historian, Dawn Adès, who brought her then 20-year-old son to Berkeley when she taught pre-Columbian art history at the University of California, igniting a passion for the state that ultimately led him to become a part-time resident of Los Angeles.

While he's not exactly a synesthete like Scriabin or Michael Torke ("I don't go in thinking, 'This is the ocean, therefore I use C-sharp here'”), Adès does acknowledge "a very elaborate cosmology of pitches, for example A is to C sharp as the earth is to the sea. I notice after I've written something that where a certain subject is appearing, this note also tends to appear."

That relationship between image and sound underlies Adès's fascination with the Dadaist and Surrealist art of the 1910s through the '20s, "periods where there's no agreed right or wrong way of looking at things," he says. "What you saw was also an idea, and the artwork could be a sound as well."

Not that he plans to make the visual art himself. "My work itself is definitely the music, and I leave the visual side to the visual people," he says. "But I certainly don't think I'm dealing with pitches and that's the end of it, even though at the end of the day, I'm still pushing notes around to get them to do what I want. But what I want goes beyond just sound. Touch, sensation, smell, images ... all these things can inform the way we experience the music. The only reason I do what I'm doing is that it involves the whole world of sensation, not just the ears."

In Seven Days is only one of several works Adès chose for his S.F. Symphony program that also mirror the creation of a whole world. The great, 20th-century French composer Darius Milhaud's jazzy, Brazilian-inspired ballet score The Creation of the World (La Création du monde) takes off from an African creation myth. Charles Ives's haunting The Unanswered Question grapples with another aspect of creation, what the composer called "the perennial question of existence."

His conducting appearance with the Symphony is just the latest in a string (Living Toys in 2006, Chamber Symphony in 2007, the violin concerto Concentric Paths in 2009, another Rosner video-augmented but very different work, Polaris, in 2011) of performances of his music by the orchestra.

Adès spends roughly half his time in L.A. now. "I'm fairly migratory. I think the way people move around now and travel, it's not quite as dramatic a thing to move from one city to another," he muses.

It's more the process is going on inside me. I like the freedom and diversity of the scene here in California. It's a lot quieter than in London [where he lives in the central city]. The London new music scene is very busy and full of people, a certain kind of excitement, and a lot of concerts all the time. Here, what I've noticed is I'm perhaps freer to be different from everyone else. There's not so much banding together here in the same way, not a feeling you should do things one way or another. I think it's good to know what's out there, but there's a point where I've got to close the door for awhile. I've found it easier to hear my own voice if I'm not listening to a lot of other ones."

His calendar shows dozens of performances of his music as well as conducting and solo piano gigs coming up. So he'll need that creative space to complete his next project: another opera (to follow his landmarks Powder Her Face (1995) and The Tempest (2003) slated for production later this year. And after seeing a choreographer set an existing work of his for 64 dancers last year, "it was very clear to me after that I must write a ballet for dancers." Thomas Adès is still creating new worlds of both sight and sound.