There will be a lot of private family events this weekend, but if you’re looking for something to do with the family to celebrate, or for no special reason, here are some best bets.

The ballet was choreographed in 1789 by one of the great ballet masters of the era, Jean D’Auberval, who in turn was inspired by a painting done the same year by Pierre-Antoine Baudouin: La réprimande/Une jeune fille querellée par sa mère (In effect, a young girl rebuked by her mother.) D’Auberval named his ballet La Fille Mal Gardee, which might be directly translated as, a girl poorly guarded, which perhaps has a certain prurient connotation. The ballet this weekend has been translated to “The Rebellious Farm Girl.”

The ballet has been cast in various versions, notes Artistic Director Alexi Zubiria: “This production mainly has two flavors: Frederick Ashton’s version, classical and conservative, and Hans Spoerli’s, still classical with a neo-classical flair. I was drawn to Spoerli’s version because of its newer pas de deux style and technique, with which I trained and danced. It also fits well with the style of ballet taught at our school.”

Versions aside, the emphasis has been to bring to life a comedy that can be enjoyed by people of all ages. “I would say for children as young as 4 or 5,” Madeleine Koster told us. She is the youth program manager with the Western Ballet. “ It’s very lively and colorful. Wonderful sets and costumes and lots of laughter.” There will be an intermission.

The ballet features Alison Share and Maykel Solas (courtesy of Ballet San Jose) along with graduating students from the ballet’s youth program. Incidentally, this is one of the premier ballet programs in the Bay Area, for ages 3 to 19. Note also a summer intensive program with a variety of classes for students at all levels. 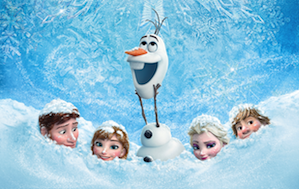 April 19, 1 p.m. at the Castro Theater in San Francisco, just off Market Street in the Castro District, “Sing-Along Frozen.”

The program note reads, “Warm up your vocal chords, Frozen-atics. It’s time to join Anna and Elsa in song and “Let It Go” with your kindred spirits. Sing along to the words of the Academy Award-Nominated film, accompanied by on-screen lyrics with a bouncing snowflake to follow along.”

This is one of those unique events in the city that if you’ve never attended, you should — for the entertainment, for the sing-along that is a Castro Theater staple, but also just to experience the Castro Theater itself. It is one of the city’s great landmarks. Built in 1910 a few doors down from where it is now, it reopened in 1922 and is distinguished by the ornate interior and, of course, the mighty Wurlitzer pipe organ, which is usually played before films and events. It’s also one of the last theaters in America to offer films in 70mm. And so the next time they show Lawrence of Arabia, for example, or any David Lean films, for that matter, by all means, don’t miss.

April 19 and 20, 11 a.m. to 3 p.m. at the San Francisco Zoo: Play for the Planet! Earth Day celebration. Live Entertainment with the kid-friendly band The Raytones. In addition, a scavenger hunt; crafts; Face Painting; costumed animal characters; docent-guided biofact carts; “keeper talks” at the otters (1:30 p.m.), squirrel monkeys (2 p.m.) and polar bears (2:30 p.m.); Wells Fargo Wildlife Theatre Show at noon (Sunday only); Free lecture at noon: Saturday only, Working Dogs for Conservation; and a family bikeabout (Saturday only, 8:30-10:00, pre-registration is required.) It’s all free with paid Zoo admission. Weather at the beach this weekend is forecast to be sunny on Saturday; partly cloudy on Sunday. Best weather is late morning to early afternoon. We ecommend John’s Ocean Beach cafe for breakfast/brunch. It’s just across the street from the zoo.