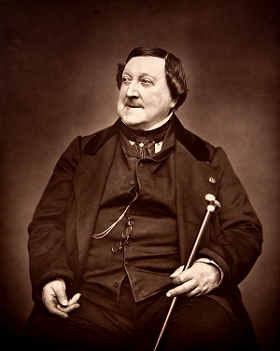 Gioachino Rossini (1792–1868) was probably the first composer to become a celebrity. The French press reported the Italian composer’s every move on his first official visit to France, in 1822. During his long life after his retirement, stories about his wit, his hospitality, and, of course, his gastronomic excesses continued to circulate. We know about famous toasts he gave, and eyewitnesses have reported his cooking for friends — would that we had that kind of detailed reporting about the creation of his operas!

Food and food stories followed Rossini. For the premiere of his French grand opera William Tell, chefs in Paris prepared an apple tart with an arrow of sugar decorating the top. Having lost a bet to Rossini, a friend owed him several truffle-stuffed turkeys. The friend tried to get out of it, saying that no good truffles were to be had that season. “No, no,” Rossini responded, “that’s a lie put out by turkeys who don’t want to be stuffed.”

The great chef Antonin Carême was one of Rossini’s best friends, and whenever he sent the composer food, Rossini would write a short song or aria for him. Carême was “the only man who ever understood me,” said Rossini, who once remarked that he would travel to America only if Carême went with him.

There are so many “alla Rossini” recipes by this time that they could fill a book. In this list, I’ve privileged the most famous ones and added a smattering of newcomers. But I’ve left a few modern foods off the list, deliberately. I’m not sure Rossini would have bothered eating pizza, but if he had, he surely would have given Pizza Rossini a miss: Eggs and mayonnaise? Yuck!

1. Macaroni Soup alla Rossini
This dish was created by Carême himself, who was pleased enough with it that he thought it worthy of bearing Rossini’s name. It’s basically a Neapolitan macaroni soup with partridge carcasses added to the broth, to which Carême added a garnish of partridge quenelles (meat mixed with breadcrumbs and bound with eggs, and then poached). Now for the cool part: You take the serving tureen and layer Parmesan cheese over the macaroni, repeat, and then top it with quenelles. Sprinkle with macaroni broth and stock. Hardly counts as soup at this point, but who cares? 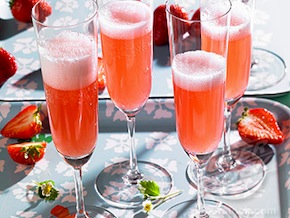 This is an honest chicken soup à la reine (that is, with cream), to which you add seven ounces of goose-liver butter (puree of goose liver trimmings with butter).

3. The Rossini Cocktail
If you’re not in the mood for the more famous Bellini cocktail (and we all need a break from Bellini now and then), here’s its Rossinian comrade-in-fermentation: Mix 16 halved strawberries with two tablespoons sugar and allow to macerate for about an hour. Blend the strawberries, put a couple of tablespoons of the puree in the bottom of each glass, and top with Prosecco.

4. Risotto alla Rossini
It’s just your basic risotto, if you cook your basic risotto with champagne. Plus goose liver and seasoned beef tongue (salmistrata lingua). It’s actually pretty easy to make, like all risottos, and it’s yummy. If you don’t like liver and foie gras, you’re out of luck on this list. Rossini did his best to add them to every dish he made or ate.

5. Filet of Sole alla Rossini
Dover sole wrapped around a slice of foie gras and cooked in foil with half a shallot and half a truffle. Truffles are the other mainstay of the “alla Rossini” menu. 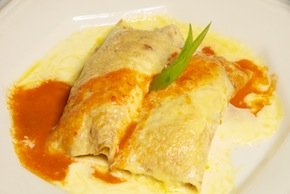 No foie gras or truffles here. You start with veal poached in wine, garlic, onion, butter, and rosemary. To fill the cannelloni, pass the meat through a grinder; mix with an egg yolk, cream, ricotta, grated parmesan, cinnamon, and boiled spinach. The cannelloni are cooked in tomato sauce topped by béchamel sauce and a sprinkle of parmesan. It’s going to hurt the diet, for sure, but this is how a man like Rossini got to be a man like Rossini.

7. Pheasant Suprême alla Rossini
Pheasant breasts stuffed with butter and foie gras and herbs, which are then cooked in clarified butter and deglazed with Madeira wine. Guess the garnish: If you said “foie gras and a slice of truffle,” you’re correct. Top with madeira sauce. (Make an appointment for angioplasty.) 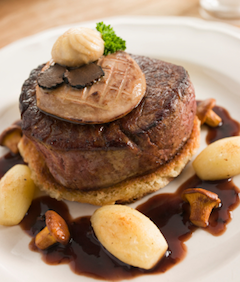 The stuffing is made from truffles and bacon and a spoonful of Madeira. But that’s not the hard part. The hard part is getting a couple of ounces of thinly sliced truffles under the skin of the bird without breaking it. Don’t forget to band strips of lard across the bird for roasting, before you truss it.

9. Tournedos alla Rossini
This is it — the most famous dish in the Rossinian gastronomic canon. A lot of stories purport to tell how this dish got its name. In the most famous version, Rossini required a chef at the Café Anglais in Paris to prepare his meal at the table, but he kept interrupting with instructions and requests. When the exasperated chef finally complained, Rossini supposedly said, “Well, if you don’t like it, turn your back” (“tournez le dos”). This is sauteed filet mignon on buttered toast, topped with the mandatory slice of foie gras and truffles, and finished with a small pond of sauce made from veal stock, the pan juices of the filet deglazed with (what else?) Madeira, chopped truffles, and butter. It’s a dish that is the last word in decadent haute cuisine.

10. Coupe Rossini
We can’t forget dessert, can we? McCall Catering created this recipe for the San Francisco Opera gala featured on the Food Network’s “Behind the Bash” show. It’s a layered dessert served in a glass. Start with ladyfingers topped with strawberry coulis and sliced strawberries. On top of that, pile a mound of mascarpone cream (mascarpone cheese, cream, and sugar), and after that some blueberries, blackberries, and raspberries, and finally atop that a scoop of strawberry sorbet. You can stop there, though the pros add chocolate “cigarettes”: puff-dough “pencils,” with a white-chocolate ring and a mint tip. Rossini would have loved it.