“Up to this point, it’s all been an experiment, to see what works where.” That in a nutshell, has been Charith Premawardhana’s mission in seeking beyond the Mission for venues for Classical Revolution, the alternative performance movement he co-founded six years ago. SFCV tapped the violist-turned-impresario as our designated scout for the greater part of our Top 10 Hip Places to Dig Classical and New Music. The list is laid out in no particular order of hipness. This September, Classical Revolution will be making use of some of these places, and other venues, to showcase its first-ever annual Festival, feauturing its familiar instrumentalists along with an array of other local ensembles. 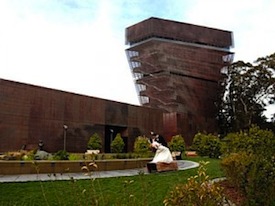 “The Koret Auditorium [at the de Young] is a great, great acoustic room,” says Premawardhana. “I’ve also played a couple of times in the main courtyard area. It’s not ideal acoustically, because it’s a huge expansive room. But it’s a fun hang, and they’re really good to us. It’s a great place to meet music lovers, at the free events, people are really happy to be there.” On special Friday nights, music lovers are encouraged to share their love with the visual arts on abundant display as well as film screenings and panel discussions.

Great American Music Hall, 859 O’Farrell St., S.F.“This is my favorite venue in the city, both acoustically and how it looks. We’ll be doing our first orchestra concert, on Sept. 27. I played there once with the Magik*Magik Orchestra, and it sounds really good; I don’t think we’re going to need to amplify it much.” In addition, staff at the Great American (which shares management with Slim’s) go out of their way to make their venue a caring place to have fun, no matter which of their many genres of music they’re featuring.

“We played a quartet set there, sharing with the Real Vocal Quartet. They do have a great sound system. And I’ve played there with the Jazz Mafia. It’s more of a formal setting, it’s a listening environment, too. And the food is good; who doesn’t like Japanese food?” The Yoshi’s operation, which began decades ago with jazz and dance by the eponymous owner in the original club in Oakland, has expanded its bookings beyond jazz with the opening of a second club across the Bay in San Francisco. The clean, well-managed venue has hosted several events for classical radio station KDFC. 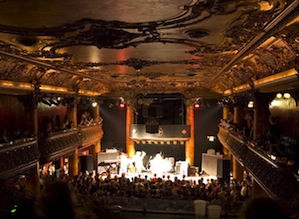 “Outdoor venues are always challenging, especially in the summer in San Francisco. We’ve done the side stage at Sloat.” For 75 years, audiences have been perfectly willing to gather for hours in advance under the climatic challenges of the Outer Sunset, occasionally bathed by sun instead of fog, but always surrounded by a tall, thick stand of trees, which seem to freshen the familiar and unfamiliar acts which grace the Festival’s Sunday afternoons, from June through August. Among the familiar are San Franciso's major league institutions: the Symphony, the Ballet, and the Opera (appearing there on Aug. 19). You have to like crowds as much as you like music, but once you deal with the paucity of parking, the long hike in, and seeking out a spot of grass or hillside to spread your blanket, picnicking with the masses can be inspirational.

“The new one is acoustically amazing, and bigger.” Located in the heart of what’s developed as Berkeley’s performing arts district, the new Freight is a woodsy evocation of the friendly and creative spirit of a college town. The Classical at the Freight program, over the years, has put ensembles, mostly from the San Francisco Chamber Orchestra, in a user-friendly environment, and next month (Sept. 24) you’ll hear SFCO concertmaster Robin Shar with violinist Laura Dahl. Premawardhana might want to bring his ax to this year’s ViolaMANIA 2.0, occupying the Freight on Oct. 29.

Although it hasn’t featured classical as much as a potpourri of alternative musics, “they do really great programming, there’s never a bad concert there, and the people are really cool. The room itself is small and intimate, and it’s free [though not always].” 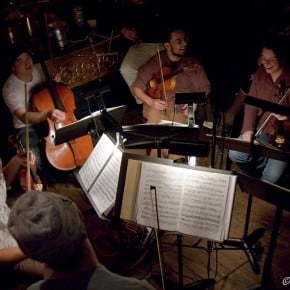 The founding venue for Classical Revolution was not far from co-founder Premawardhana’s rented storefront room in 2006. “That’s where the independent arts community was hanging. You had jazz musicians playing hip-hop music, all kinds of variations. We’ve played there every week since November of 2006, mostly Monday nights, except for a couple of weeks. Musicians like to play there [among them major local players and visitors], and you’ve got this strong contingent of nonprofessional musicians. The common threads are, they’re passionate about chamber music, and they’re having a good time. When the doors are open, the room serves as sort of an amplifier. It’s not all young people, it’s a pretty good mix.” If you’re legal, you can get wine or beer, and even if you’re not, there’s coffee, and plenty of nearby places from which to import a burrito.

A showroom for an international array of “art case” pianos, Salle functions, on Wednesday evenings, as an evocative “Music Szalon,” serving up classical sounds and classic wines in a Baroque/Renaissance setting. A short stroll from Zuni Café, Salle is also the site of an occasional wedding.

An oasis of cool calm outside this warm, wine country town, and one of the stops on Sonoma Bach’s Early Music Festival, this is what music director Robert Worth has said, “would be our home, if we could swing it.” It’s modestly handsome, and acoustically responsive.

During the prolonged renovation of its home in the iconic Noe Valley Ministry building, which also hosted performances by the likes of Bobby McFerrin and Kitka, the Noe Valley Chamber Music Series is nesting at this other lovely edifice across town. Other joyful noises at St Mark's have included the Chanticleer Youth Choir, S.F. Sinfonietta, and the Kings Trumpets.