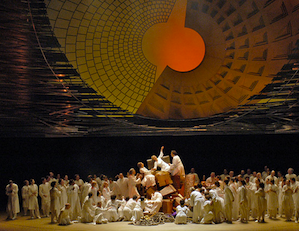 Early reviews about the revival of Francesca Zambello's staging of Berlioz's Les Troyens are harbingers of bad news about one of my favorite operas. I just hope the David McVicar Vienna-Milan-San Francisco-London co-production will rise above this by the time it arrives here in a couple of years.

... it sprawls well over five hours, aspires to mythological profundity, requires massive choral and orchestral forces, dabbles in balletic divertissement, and makes unreasonable demands on a presumably high-powered cast. Yet there it was Thursday night at the Met, looking awful and sounding uneven.

Zambello’s staging, first and last seen in 2003, manages to accentuate the negative. Given a semi-abstract unit-set by Maria Bjørnson, it plods along, cluttering the narrative with endless parades and irrelevant detail. Everyone makes unison gestures on cue, usually arms stretched in the air. Everyone comes and goes, rises and falls, runs and struts, poses and preens without apparent motivation.
...
The role of Cassandra seems to lie low for Deborah Voigt’s now somewhat threadbare soprano, and she was awkwardly partnered by Dwayne Croft, who sang Coroebus despite indisposition. Marcello Giordani tried bravely, also loudly, to cope with the heroic thrust and lofty tessitura of Aeneas. Susan Graham brought keen compulsion to the plaints of Dido despite occasionally edgy tone. Karen Cargill exuded sympathy as Anna, Eric Cutler soared as Iopas, Kwangchul Youn grumbled darkly as Narbal, and Paul Appleby sang sweetly as Hylas. Everyone worked hard, but in vain, to validate a performance predicated on much pomp and little circumstance.

There was a less critical review from The New York Times' more circumspect reviewer, but James Jorden in The New York Post let it rip:

Worse still was Francesca Zambello’s 2003 production, a jumble of running, jumping and spear-waving in front of Maria BjÃ¸rnson’s tatty set, which made both Troy and Carthage look like an explosion in a Venetian blind factory.

Of nearly an hour of Doug Varone’s clodhopping ballets, the nadir was a listless dance-off between boys in hammer pants and girls in yoga pants that dragged the fourth act to a screeching halt.