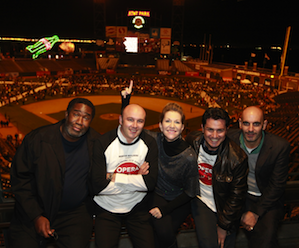 What better way to prepare to sing Bellini's The Capulets and the Montagues than to munch on garlic fries while applauding colleagues in the Rigoletto simulcast in AT&T Park (whose usual occupiers, the Giants, are 7 1/2 games ahead of Los Angeles in the National League West division)?

Not shown in the photo, Nicole Cabell (Giulietta — why use the awkward English title for the opera, but keep the Italian names?) and Ao Li (Lorenzo). Of the ballpark event, here's a first-person narrative from the audience:

After a bit of very avoidable and snarly confusion at the entrance, we went up to the VIP deck, and the fun began. Everyone was casual and the ballpark fun food, tiny hot dogs, slider size burgers, and quesadillas were passed generously. There was a mini buffet, too, plus wine and beer.

It was a big crowd and the outfield was packed with picnickers, including a lot of kids. Our seating was dead center in sec 218 for those who know the ballpark. It made more sense to me that it was an evening performance, though seeing the big screen had not been a problem during the earlier matinee AT&T experience.

It seemed a non sequitur to have a barber shop quartet sing The Star Spangled Banner. Someone said they were the winners of a competition for the honor. OK.

There were some glitches with balance and feedback in the sound system. From the beginning, Francesco Demuro (The Duke) was the weak link. He was pushing his small voice and never seemed comfortable. Aleksandra Kurzak (Gilda) sang well but I felt no chemistry between her and Demuro. Zeljko Lucic (Rigoletto) warmed up and from "Piangi, Piangi" onward he was all one could have wanted. The best in show were Andrea Silvestrelli (Sparafucile) and Joo Won Kang (Marullo).

As always, the camera alters the production. Too many headshots. If not familiar with the abduction scene, it might not be understood that it was a street scene as there were too many closeups.

Meanwhile, San Francisco Opera is holding auditions for singers to participate in the world premiere production of Nolan Gasser's The Secret Garden, next March, in Zellerbach Hall.