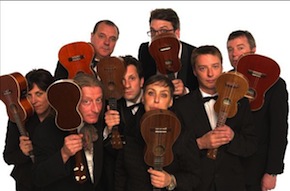 No doubt, the ukulele is back for an encore, and suddenly it’s everybody’s little darling. Not a new instrumental phenomenon, this one seems to be gaining more respect for a myriad of reasons. There’s something about that saccharine strummed string sound that puts a smile on the face and a song in the heart — whether that song is a Hawaiian folk melody, an American pop tune, or an arrangement of the music of J.S. Bach. And indeed, there is not one country or one genre that is not enlivened by this diminutive chordophone.

Arguably, recent attention paid to the instrument by today’s pop stars has greatly increased its popularity among the younger generation. When country star Taylor Swift pulls out her uke on such songs as Fearless and I’m Yours, its “cool” factor is exponentially increased. “Soul Sister” by the American band Train, with its bouncy ukulele backbeat, was the second-best-selling song in the U.S. in 2010, and sold over 5 million digital copies in America alone.

Yet, according to other proponents, the uke means more than sales. Musically undervalued, the ukulele goes way beyond its sometimes-comic role (think Tiny Tim) or its function as accompanist for dancers or singers. Modern-day virtuosos like Jake Shimabukuro or Canada’s James Hill are pushing the limits and possibilities of the instrument itself, garnering more and more respect for the uke as a real vehicle for musical expression.

Known in jazz and other circles, the young Shimabukuro is a pure phenomenon. According to All Music Guide, he’s “a monster musician and boldly takes the ukulele where no ukulele has ever gone before.” His career truly skyrocketed after he recorded George Harrison’s While My Guitar Gently Weeps for a TV appearance in New York. The clip went viral, and is currently approaching 8.5 million views on YouTube, which has led to his collaborating with other great artists of folk, rock, and classical music, and also releasing his first independent CD, Peace, Love, Ukulele.

Modern-day virtuosos are pushing the limits and possibilities of the instrument itself, garnering more respect for the uke as a real vehicle for musical expression.Says Shimabukuro in his promotional material: “Since the ukulele was the only instrument I had, I had to figure out how to bring out the melody and make it recognizable, which is hard to do because it’s just a four-string, two-octave, instrument.… I hope to inspire more people to take an interest in the young instrument. I believe the ukulele is the instrument of peace. If everyone played the ukulele, the world would be a better place.”

Shimabukuro came up out of the definitive ukulele studio, that of Roy Sakuma in Honolulu. Sakuma is not only the modern torchbearer of the Hawaiian ukulele tradition, but also the founder of the Annual Ukulele Festival at Kapiolani Park Bandstand on Waikiki. The largest ukulele festival of its kind in the world, it draws crowds of thousands, guest artists from around the world, and a ukulele orchestra of over 800, mostly children.

“The uke is great for amateurs — it’s easy to play, so it brings a level of satisfaction right away.” — Michael DaSilva

It makes sense that the ukulele is ensconced in Hawaiian folk music and tradition, having developed there in the 1880s. Brought to the islands by Portuguese sailors as a version of the early guitarlike instruments the cavaquinho and the rajão, the instrument was wholeheartedly adopted by King David Kalakaua, thus embedding it firmly in the culture of the Hawaiian people.

The first port of entry to mainland U.S. for the uke was the Hawaiian Pavilion at the 1915 Pan Pacific Exhibition (World’s Fair) in San Francisco. Generating wild audience interest, perhaps for its novelty, the uke was quickly embraced by composers of Tin Pan Alley, vaudeville shows, and the jazz of the 1920s. The next wave of interest came in the 1950s in the form of a fascination with all things Hawaiian: tiki torches, flowered shirts, tropical drinks with tiny umbrellas in them, Trader Vic’s, and the ukulele. Stars like Don Ho and Tiny Tim put the uke on the musical map for another decade. 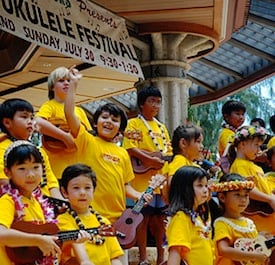 Not only the instrument’s entertainment value but also its educational value was realized in Canada, where the ukulele was integral to the development of a nationwide school music education program in the1970s — one that’s still going strong. Says J. Chalmers Doane, the man behind the movement: “You can get a complete music education through the use of this instrument.

It teaches harmony, melody, texture, tone, rhythm: It’s all there in the uke. You can’t do that on many other instruments, and it’s also portable and inexpensive.” Doane (a student of the Bornoff String Method in Boston) has devoted his life’s work to employing the uke in music education, having written method books and trained teachers throughout the country. The program spread from his base in Halifax to nine of the 10 Canadian provinces (every one but Manitoba). He estimates that at the peak of activity 50,000 kids were playing — work that his student James Hill carries on today.

Perfect for the Amateur

The proliferation of amateur ukulele clubs today shows the power of this instrument to build communities across generations. Michael DaSilva, a Berkeley ukulele maker and organizer of the Berkeley Ukulele Club, quit his day job 10 years ago to keep up with the constant demand for his beautiful instruments. He says, “The uke is great for amateurs — it’s easy to play, so it brings a level of satisfaction right away.” He believes the instrument is popular because it’s affordable, “leaves your mouth free for singing,” and has a nice sound. Clubs have sprung up in the past five years, in Australia, North America, Europe, and Japan — the largest one reputed to be the Ukulele Club of Santa Cruz, California.

And fully professional ensembles are active, as well. The Ukulele Orchestra of Great Britain is claiming some credit for the surge in popularity of the instrument there and in Australia. Since its beginning in 1985, it has introduced new audiences to the uke through international tours and recordings. At its performance at the BBC Proms in 2009, a thousand audience members played played Beethoven’s “Ode to Joy” as the finale.

With the cyclical nature of things, who knows how long the current ukulele craze will last? But one thing is certain: This little gem of an instrument has deepened its niche in many arenas, from concert halls to clubhouses, festivals to the Internet. And as its musical and social value grows, it may just have to be taken a bit more seriously.