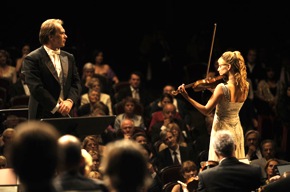 Crowded Out of Eden: Composers and the Hollywood Dream

Although the memory of hearing 9-year-old Sarah Chang perform it in Walnut Creek is still crystal clear for me, other experiences of the Tchaikovsky Violin Concerto are simply too numerous to remember. It’s great music, but a veritable warhorse.

And yet, a few months back, at the screening of Radu Mihaileanu’s The Concert, which ends with a long segment of the Tchaikovsky, the burden of excessive familiarity fell away. In the context of the film, the music was fresh and deeply affecting, spreading muffled sniffles in the theater.

Let us speak, then, of movies extolling music and musicians. It’s a narrow focus, because writing about classical music’s intersection with films in general presents an embarrassment of riches. There are myriad soundtracks using (or abusing) classical music; conversely, music written for movies sometimes becomes perfectly good repertory for the concert hall. Examples range from Aaron Copland, Bernard Herrmann, Miklós Rózsa, and Erich Korngold to Philip Glass (especially Mishima, which deserves to be heard more often).

In the movies-about-music category, in recent times, besides the 2009 The Concert, Tous les Matins du monde (1991) comes to mind. Alain Corneau’s period drama focused on Marin Marais (played by Gerard Depardieu, in one of his best roles) and his recollections of his teacher, Sainte Colombe (Jean-Pierre Marielle).

Gérard Corbiau’s Music Teacher (1988), with José Van Dam, is not only a great film, but it also is responsible for the beginning of a love affair with Mahler for many a viewer. Van Dam’s performance of “Ich bin der welt abhanden gekommen” in the film lives on and on.

Corbiau is also responsible for a personal favorite, which may not be to everybody’s liking: Farinelli (1994), about the greatest castrato of them all. Admittedly overdramatic, the story, the music, and Christophe Rousset’s musical direction combine for an eminently worthwhile film. The digitally merged voices of soprano Ewa Malas-Godlewska and countertenor Derek Lee Ragin provide a preternaturally faithful representation of the castrato voice. 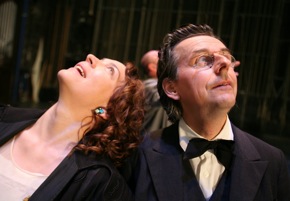 Another Corbiau gem is his unjustly neglected film from 2000, The King Is Dancing (Le Roi danse), about Jean-Baptiste Lully (played by Boris Terral), especially in his dealings with the Sun King, Louis XIV (Benoît Magimel), and Moliere (Tchéky Karyo).

Biographies of musicians make up an entire subcategory, from the heavily fictional (Amadeus and the like) to faithful documentaries, with Ken Russell’s notable work somewhere in between: The Music Lovers (1970) about Tchaikovsky, Elgar (1962), Lisztomania (1975), and, perhaps the best of the lot, Mahler (1974).

Of Mahler, the latest film — not nearly equal to Russell’s — is the 2010 Mahler on the Couch, whose U.S. premiere this month in San Francisco was reviewed in Music News.

François Girard’s Red Violin (1998) is not one of my favorites, yet it’s a pretty good film, which certainly belongs here, with fair music by John Corigliano and gorgeous playing by Joshua Bell. 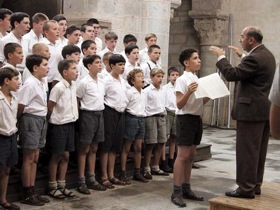 Let me get rid of a few misbegotten films (my opinion only, of course): the roiling Shine (1996), with Geoffrey Rush doing his best to portray poor, traumatized David Helfgott, an Australian pianist; Bernard Rose’s thoroughly amateurish Immortal Beloved (1994), with Gary Oldman as Beethoven (the composer, not the dog — let’s not even think of that “funny flick”); and Michael Haneke’s sick and sickening The Piano Teacher (2001), with Isabelle Huppert.

Going out on a high note with some of the best of the lot:

Katherine Hepburn as a mannered and yet thoroughly believable Clara Schumann in Clarence Brown’s Song of Love (1947); Tony Palmer’s incredible, eight-hour long Wagner (1983), with Richard Burton; one of several films called Impromptu, this one James Lapine’s 1991 comedy-drama about Chopin’s France, with Hugh Grant, Judy Davis as a perfect George Sand, and Julian Sands as Franz Liszt; and Christophe Barratier’s utterly charming The Chorus (2004).

And there are so many more ... Please join the discussion with additional nominations and comments (below), because there is no end to this topic.