We’re adding a new feature to the Kids Around the Bay column, in which we report on what’s going on in the schools. It’s an effort to give parents a close look at the resources and philosophy that different schools offer. We begin with the San Francisco Waldorf School and a chat with David Weber, a humanities and music teacher in the Waldorf High School. For many years he also taught children at the Waldorf lower school. 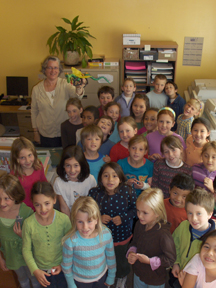 By way of background, the first Waldorf School opened in 1919 in Stuttgart Germany, the creation of Rudolf Steiner, an Austrian philosopher strongly influenced by, among others, Johann Wolfgang von Goethe. The education is “alternative,” holistic, and despite a common misconception, not religious. The San Francisco Waldorf School started in 1979; the high school opened in 1997. Its overall philosophy, which increasingly has been picked up by other schools, is “Head, Heart, Hands.” The music curriculum, which is in the very nature of holistic education, is practice-based but includes a good deal of music theory. Each high school student is required to take four years of music. Students who don’t have a music background sing in the choir or play the guitar in beginner classes. There are also an orchestra, a jazz band, a choir, and various ensembles, including a drum ensemble.

“Our primary goal,” says David Weber, “is not to turn out musicians but to influence a student’s approach to life and their ability to make sound judgments through the artistic effects of music. We think that the study of music makes students much more well-rounded.”

In the lower grades, the pedagogical approach is to use music to wake the child up through the “sensing of the heart”. As Weber puts it, “meeting the child where they are and involving them in the artistic process” — to feel, if not understand, how colors go together and shapes go together; how notes can be in tune and tones can go together. “It’s an effort to develop a very fine sense of what is beauty and harmony and allow that to become part of their thinking. The idea is that mind and heart go together and over time, as they get older, this enables them to use an appreciation of beauty to find truth.”

“Everybody talks about the ‘Mozart effect’ and how the brain and motor skills in particular are affected, and we’ve found that to be true. So we want younger children doing music every day. That’s why children play recorders initially, and then when they reach the third grade, around the age of nine, we encourage them to try out a standard orchestral instrument, and to take that up as a discipline. It doesn't mean we stop with singing and recorders, but we make music a subject lesson. That’s also when we begin forming small class ensembles, which continues right into the high school.”

The importance of storytelling in a Waldorf education, says Weber, cannot be overstated. “We want to encourage thinking that is not merely abstract, intellectual and cold, but is combined with a sense of humanity. And so the importance of stories and, of course, music tells its own kind of stories. It gives us the ability to create ‘landscapes of feeling’ when we play or listen to music. This is something that Steiner talks about: A melody statement in music is more specific and definite in its meaning than any written statement. Or think of it this way: The quality of a Schubert melody on a cello is more definite than any word expression, because you can feel it and understand it with your heart. For children, this offers new places to imagine themselves and new ways to be creative.”

The San Francisco Waldorf High School offers at least three music-related events every year: a winter concert in November; a Eurhythmy performance in the winter; and other musical performances later in the year. For more information go to sfwaldorf.org.