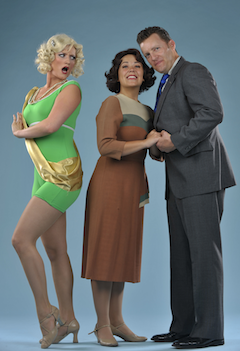 Of all the semi-forgotten glories of American music theater, the Gershwins' Of Thee I Sing is among the best. How could the great title song; "Love Is Sweeping the Country," "Wintergreen For President," and — above all — "Who Cares?" ever leave the stage?

(The subject here, as if this needed to be said, is not Barack Obama's book of the same title. Or maybe, you didn't know about the book either!)

We are relatively lucky in San Francisco: In 2005, the S.F. Symphony performed an abbreviated version (adding, needlessly, a similarly shortened version of Let 'Em Eat Cake, an unoriginal sequel), and now, just in time for the climax/dénouement of the 2012 election, 42nd Street Moon has come up with a vivacious, charming, heartfelt production.

Not only does President Wintergreen's election campaign coincide with the approach of our own Presidental election on Nov. 6, the production also marks the opening of 42nd Street Moon's 20th season. Greg MacKellan’s and Stephanie Rhoads' Little Company That Could has revived more than a hundred "Forgotten Broadway" gems; George and Ira Gershwin's 1932 work, the first musical to win the Pulitzer Prize for Drama, is just the latest.

One of the company's great accomplishments is to go up against the contemporary Broadway craze of amplifying the hell out of everything, no matter how small the venue. There is no amplification, no belting in the 200-seat Eureka Theatre — just singing, by talented actor-singers, who perform musicals from and with heart, and quite without the artifice of failed opera singers. 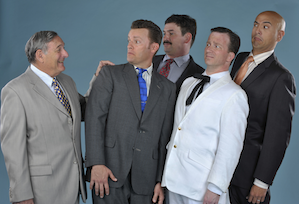 When Noel Anthony (Wintergreen) and Ashley Jarrett (Mary Turner) sing "Who Cares?," the sound is gentle, embracing, intimate. Against the full orchestra in Davies Symphony Hall seven years ago, this performance features a heroic duo: Music Director Michael Anthony Schuler on a piano that at times sounds like an orchestra, and Nick di Scala with a variety of woodwinds.

"Who Cares?" has an ecstatic melody and an unusual structure: very short, with an introduction longer than the song itself, and — according to a composer friend — "not the standard AABA with a bridge, but ABA'C." But who cares? It's just grand, deserving of George Balanchine creating a gorgeous, eponymous ballet around it.

MacKellan's stage direction is — as always — simple and to the point; never would he be allowed in German opera houses because he focuses on the work, instead of trying to prove how clever he is. Schuler's musical direction is equally straightforward, with excellent balances. 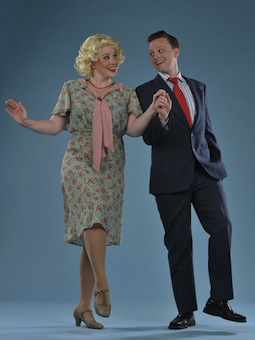 Jayne Zaban's choreography, on a small stage and without professional dancers, is entertaining. The cast — only four of whom are members of Actors' Equity — is terrific. Unlike productions in other small companies, the ensemble/chorus/small roles have no weak links.

The Gershwins' prophetic story about the impeachment of a president was written 66 years before Clinton coming to grief over Monica. Even as a parody — and it is a hilarious musical — because it is coming from a more innocent age, there is no, ahem, liaison, only a hairbrained campaign idea of a political beauty contest. The winner is to become the bride of the bachelor candidate.

Wintergreen falls in love with Mary Turner and her corn bread, and marries her, but the winner — a Miss Devereaux (Brittany Danielle, vamping nonstop) — who is alleged to be somewhat related to Napoleon, enlists the French ambassador (Stewart Kramar) to create a national/international incident. Between that nutty premise and the thoroughly satisfying resolution, there are many surprising nuggets, such as the Supreme Court deciding the winner of the election. (That could never happen, could it?)