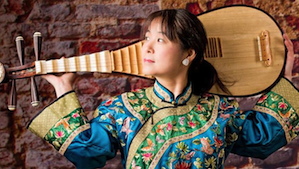 Pipa virtuoso Wu Man famously fell victim to airline negligence not long ago, but all is well again, and she is heading our way (presumably not on US Airways) to perform.

Having just completed a series of performances in Sonoma, she will be giving a concert on Jan. 26 in Berkeley's Hertz Hall.

Winner of Musical America's 2013 Instrumentalist of the Year Award, Wu Man (read interview) has been both a star soloist and a renowned scholar of music in little-known regions of Asia through research of her instrument's history. The pipa's four strings stretched over a shallow rosewood box can produce rich, complex music in her hands.

Her Cal Performances recital will explore the full range of the instrument by demonstrating traditional sounds, as well as those she creates when performing with such contemporary composers as Tan Dun, Terry Riley, and Philip Glass.

Opening with two hand-written scores from the 1870s, Xi Yang Xiao Gu (Flute and Drum Music at Sunset) and Shi Mian Mai Fu (Ambush Laid on Ten Sides), these compositions feature the “civil” and “martial” styles of classical pipa music — the latter portays the epic battle between the kingdoms of Han and the warlord of Chu in 202 B.C. The program moves into the 20th century with Liu Tianhua’s Xu Lai (Meditation) and music from Kyrgyzstan, composed by Nurlanbek Nyshanov for Wu Man during the Silk Road Project residency in Boston.