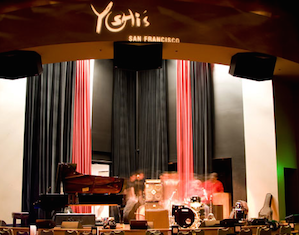 Yoshi's, the San Francisco Fillmore District jazz club, has changed hands, and will now be know as The Addition. Located between The Fillmore and the Western Addition, the club is re-named after its location.

Yoshi's San Francisco opened in 2007 by Kaz Kajimura, who was part of management for Yoshi's in Oakland, developed from a small Berkeley sushi bar in the 1970s into an award-winning 330-seat jazz club in Jack London Square, which featured the likes of Betty Carter, Max Roach, Dizzy Gillespie, Joe Williams, Diana Krall, Branford Marsalis, McCoy Tyner, Harry Connick Jr. and Oscar Peterson among hundreds of others over the years.

Yoshi's in San Francisco — a 28,000 square-foot, two-story venue — had a construction cost of about $15 million, and it struggled with debt along the way, declaring bankruptcy in 2012, then major talent taken away from it with the opening of SFJAZZ in January, 2013. Developer Michael Johnson and a group of shareholders bought out the club and revamped operations — including elimination at least temporarily of Yoshi's famous Japanese cuisine, which had earned a Michelin rating.

The club will reopen under the new name on Nov. 21, introducing a reserved-seat policy and "an all-new club menu and inspired cocktail offerings."