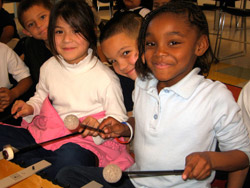 “I haven’t heard gunfire in a while,” said Ms. Bruins the other day, standing in her music classroom at Coronado Elementary, in the heart of Richmond. Her tone suggested a mixture of irony and relief.

The school of 557 is gathered in trailers behind Kennedy High School, one of the toughest high schools in Richmond, that town as famous for its dysfunction as its crime rate. On an index scale from 1 to 100 — 95 percent of all other similarly sized cities in America are safer places to live than certain neighborhoods in Richmond.

On the other hand, said Ms. Bruins — Julie, 35, and lithe, with an actor’s range of facial expressions reminiscent of comedy and tragedy masks — on the other hand, there had been a shooting the previous week near the front of the high school. A boy shot in the leg. There had been a call to lockdown and Julie spent the better part of 90 minutes leading a singalong with 1st, 2nd and 3rd graders, keeping them calm, against the blast of sirens and the sound of helicopters overhead.

Julie Bruins, with a music degree from New York University, has been a music teacher for 11 years, five years in private schools and for the last four years at Coronado. She’s full time and at once a luxury and a necessity for a school that could never get her were she not part of ZSharp, a small nonprofit at the forefront of an effort to realize the positive effects of music in public schools.

Asked about teaching in such a situation she replied, “Oh there are times when it’s very discouraging, when you realize these children have all the potential in the world but the farthest to come because they start with so little. But it’s also enormously rewarding, particularly when you see the joy they get from music and from playing it.”

So much has been said in recent years about the vital importance of music in school curricula, but in the end it all comes down to a particular kind of joy.

The Same Old ‘Other America’

Coronado Elementary is diverse. Sixty percent Latino; 40 percent African American. Poverty runs deep. Truancy runs to 45 percent. One hundred percent of the students receive free meals. And as you would expect at such a school, when the state cut music classes in 2007 there was no rush to restore them, no PTA to the rescue.

But then one day four years ago, a remarkable little organization called ZSharp appeared at the door. It is a nonprofit and one of several organizations devoted to bringing music back to California public school classrooms. But Zsharp is unique in the Bay Area because, unlike other programs that focus on after school music activities or concerts or provide music related curricula, ZSharp provides full time, highly trained music teachers, who not only teach classes but also sit in on grade-level planning meetings.

“Our purpose,” says ZSharp executive director, Dylan Tatz, “is to provide formal music education for kids who wouldn’t otherwise have it — but the goal is not only to encourage creativity and enhance self-esteem, it is to improve over-all academic performance.”

And he adds, “None of the schools we service would have this education without us.” With just 5 teachers, ZSharp serves 4,400 students in eight schools. Next year, they’ll be in 16 schools serving 9,000 students. Thirty schools are on a wait list.

The nagging truth about the power of music is that while everyone agrees — researchers, teachers, and principals, above all — that there’s a strong correlation between the study of music, or playing instruments, and academic performance, there is no direct correlation. No pure causality has been established. Which is surprising after 20 years of studies that have all but proven the biological effects of music on over-all brain function, and how that can manifest itself in higher IQ and SAT scores, a refined sense of team work and community, lower drop-out rates, and so on. In sum, the science suggests that music leads to a love of knowledge, better education, higher salaries, and a happier life.

But there’s one other effect, one causality that you can actually witness, which is as important as the link to abstract thinking: It is the way music helps to ameliorate anti-social behavior. You see that in Julie Bruins’ class of fifth graders sitting quietly, focused and ready to play their instruments, which include recorders, xylophones, glockenspiels, drums, and metallophones. And when they begin to practice, what comes across is a real sense of group focus and individual competence.

Remember the background. These are not kids over-diagnosed with this malady or that, or surrounded by helicopter parents. These are kids many of whose family members are incarcerated or have been incarcerated; parents or siblings on drugs or dead from drugs; or suffering the slings of some other outrageous fortune.

In class, there’s no look of ecstatic joy on the faces, but rather the look of children trying to do something well, and then once in harmony and rhythm, experiencing the reward of a sound greater than the parts. It is the teacher’s doing, of course, and it’s like theater in the round to watch Julie moving around the room, directing, conducting, sipping from a bottle of Synergy, relentlessly encouraging, always adding something to the music, raising the expectation, adding another instrument, moving a child from one instrument to another, demanding just a little more here, drawing out a child to try a riff there, with the subconscious lesson of how to innovate and improvise. And finish.

“There are times when it’s very discouraging … But it’s also enormously rewarding, particularly when you see the joy they get from music and from playing it.” — Julie Bruins, ZSharp music teacher

There is also the enormous value of learning to practice, again and again, week after week, month after month, in preparation for a concert next week, and in that sense to experience a big idea, Dr. Ericsson’s 10,000 hours of deliberate practice. And there was something else. Watching these kids, once they were in the music, you had the sense they were under hypnosis, that they had become entranced by their creation. And after the concert next week, says Julie, when they walk off stage, assuming they play up to their potential, they will be so excited. “They’re literally jumping up and down with what they’ve accomplished. And that’s my real reward….”

Julie tells this story of one of her current students: “I’ve had him since second grade. Always had behavior problems. Defiance, not being interested in school, the overall ‘I- don’t-want-to-be-here’ sort of thing. Problems following instructions. Then somebody told me he played drums so I brought in some drums and the deal I made was, ‘you behave for two days in a row and you’ll get private time on the drums.’ And that worked, and it turns out he’s really good, so he’s going to be playing drums and that’s what’s holding it all together. Behavior problems have subsided and now he has another role in class. He had always been known just as the kid who gets in trouble a lot, but now he’s found his passion and everybody thinks he’s super cool.”

And then there’s the not so uncommon story of the 7-year-old boy who three years ago sees his sister being stabbed by her boyfriend. Not to death, but close. The boy has to testify against the boyfriend. And he has to comes to school, but he can barely manage. He has no friends, is prone to the inappropriate, is completely introverted, and would seem without any possibilities. Then he’s introduced to drums and that makes a difference, as it so often seems to do with boys, and then one day, the kid who never talks starts singing in music class. And sings very loudly, and two-and-a-half years later everyone will tell you he has been transformed.

“The biggest misconception I see from people in and out of education is that music is some ‘extra’ thing … Our thinking is that it should be integrated, studied by every child and with the same rigor given reading, writing, and arithmetic ….” — ZSharp Executive Director Dylan Tatz

Dylan Tatz tells me his own story about the effects of music on kids. He grew up in Manhattan, and at 12 plays on a baseball team made up of kids largely from tough parts of town, including the South Bronx. Dylan makes friends with a boy named Hector, who is from the South Bronx, and tells Dylan one day, I wish I could play the piano. Dylan’s mother teaches piano and agrees to take the boy on, a boy whose two brothers had been in and out of jail. Six years later the boy graduates from high school, goes to college, on to medical school, and becomes a practicing pediatrician.

“He always tells me it’s all because of the music. ‘It gave me discipline and focus, and showed me something I hadn’t experienced before, success.’ ”

Tatz himself went on to Princeton, studied religion; got an M.B.A. from Wharton, and eventually founded his own business, which focused on startups and nonprofits. Almost two years ago, he became involved with Zsharp, after a board member approached him with the invitation, “How would you like to earn one-third your present salary?”

Last year, Tatz hired three teachers. There were 200 applications. The field was narrowed to 40 by considering only those with a minimum of five years experience as a full-time music teacher. The final cut reflected not only cultural fit, personality, and a bilingual capability, but also a willingness to be entrepreneurial.

“This is not your standard, old education approach,” notes Tatz. The name of the company, ZSharp, includes the tagline, “music for the Z generation,” which is to convey that, in an artistic sense, teachers are encouraged to brings all kinds of music into play. And in a business sense, ZSharp is run in that ‘carry-only-what-you-need’ spirit of a start-up and derives much of its funding from Silicon Valley.

The business model is based on its 501(c(3) tax status, but in the future there may also be a for-profit dimension, so that private schools with no music teachers could outsource to ZSharp. The draw is a well-educated and experienced teacher, but also a company that practices its own form of “quality control”: Teachers at ZSharp all critique each other and have access to extraordinary resources and archives full of music.

“The biggest misconception I see from people in and out of education is that music is some ‘extra’ thing, that all you need to do is tack it on the rest of a curriculum. But our thinking is that it should be integrated, that it should be studied by every child and with the same rigor given reading, writing, and arithmetic, that it’s not just fun. Of course, it is that, but it should also be seen as an academic experience that leads to concrete results and transforms lives.”