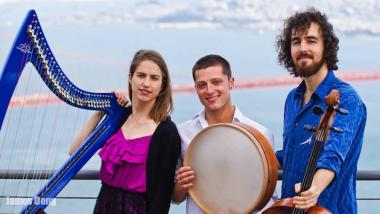 With its unlikely yet surprisingly harmonious mix of instruments, StringQuake has created an entirely original kind of music. The ensemble features Amelia Romano on electric harp, Misha Khalikulov on cello, and Joshua Mellinger on a global mix of percussion. Their music blends traditional chamber with jazz improvisation, and is influenced by the music of many cultures, including Latin, classical Indian, West African folk, and Balkan. They will be performing on Sunday, July 14 at 4 p.m. at the Old First Church in San Francisco.

Romano, 31, took up the lever (Celtic) harp when she was nine, and when she joined the Bay Area Youth Harp Ensemble, she got exposed to playing world music — Irish, folk and Latin, which she was especially drawn to. She went on to earn a degree in interdisciplinary studies at UC Berkeley, where she decided to spend her senior year in South Africa, and then returned there the following year to teach harp. That experience made her realize that she wanted to play harp for a living, so a few years after her return to San Francisco, she reached out to Misha Khalikulov, who she had met while attending the San Francisco School of Arts. They began playing together, experimenting with music from Greece and Latin America, and working on arrangements of her own compositions. Born in the U.S.S.R. and raised in San Francisco, Khalikulov, who earned his degree in classical cello performance from UCLA, had been touring worldwide with Rupa and Fishes.

The final piece of the musical puzzle turned out to be percussionist Joshua Mellinger, who Romano met while he was busking on the street with a flamenco guitarist. Mellinger is a multi-instrumental professional percussionist with a BFA in percussion performance from CalArts in Valencia, California, who currently studies tabla at the Ali Akbar College of Music in San Rafael. He uses a wide array of instruments from around the globe, including Peruvian cajon, Arabic doumbek, Caribbean steel pan drums, the Persian tonbak, and Indian tabla.

“His mix of hand percussion is so perfect because he brings in a lot of interesting rhythms, and it totally meets the needs of our different styles, sounds, and goals,” said Romano. “So it was kind of just a natural glue that came together.” They officially formed the trio and recorded their first album, Take 15, in 2013, with a second one, Cascade, in 2016.

Romano composes a lot of music for the ensemble, which is full of complicated rhythms and unusual time signatures, and they work collaboratively on the music in their weekly rehearsals. “It is like a puzzle,” said Romano. “There are pieces — and we weave it together. We take all these inspirations and then we make them into our own.”

“Our goal is to all be strong in rhythm,” added Romano. “We all like to experiment with odd meters because we like to just go other places, and Josh and Misha bring in that kind of unexpected element to the music. What stands out about StringQuake is that it isn’t led by a singer songwriter — we are all actively center stage — that is what is special.”

I chatted with Romano by phone recently about what her life and career to date.

You spent a year in Cape Town during college and then returned to teach. Why did you go there?

It was the young, enthusiastic, passionate me. I was curious about the history of the legacy of apartheid. Part of my interdisciplinary studies was looking at conflict studies and the psychological effect, and I connected that with music and youth, and how all that related. I decided to go to Cape Town because of the interesting legacy of conflict and how it was resolved, which fascinated me.

Right before I left the first time, I saw a video of the Playing for Change Foundation and how they had built their first music school outside of Cape Town, so it was serendipitous that I was heading to that location. After I finished my undergraduate [degree], I went to South Africa for a year and worked in a music school.

What made you decide to return to San Francisco and pursue music professionally?

Being in that environment, playing around musicians all the time, bringing the harp there and teaching students — that really was the catalyst. I think I just reconnected with my inner child. As much as I enjoyed academics and my studies at Cal, it wasn’t really who I was as a person. Music is what drove me as an individual, and being in that environment just reconnected me with that part of myself. Harp was always in my life, and once I got back from South Africa, I really dove into it.

You were playing an acoustic instrument — what made you take up the electric harp?

I had met a lot of musicians in Cape Town and wanted to perform there again, having built those networks, but I didn’t want to have to carry a huge acoustic harp, and I wanted to be heard because harp is so quiet. So I decided to look into an alternative and settled on electric harp because it is portable and you can hear it well, and it totally changed my career in a positive way.

You have another group called Luminance with just you and a trumpet. Tell me about that.

What I love about Luminance is that it brings out a different side of me. We can’t express ourselves completely with just one group necessarily. It is a different kind of relationship than cello and there is something about that relationship that I really enjoy exploring. The music has jazz and improv, but is also very rooted in classical.

You released your own album, New Perspectives, in 2017. How did that come about? 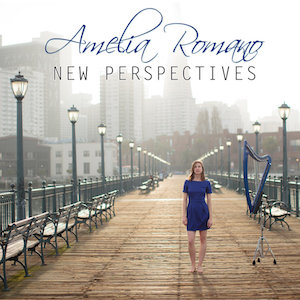 I had all these Bay Area musicians that I had been collaborating with over the years and I wanted to make an album that showed the harp in a new light, that wasn’t classical or singer-songwriter but really covered a lot of terrain. So, I invited over a dozen musicians and we all got together and made unique arrangements of blues, flamenco, singer-songwriter, and original chamber music.

What inspires you to compose?

There are many artists that have inspired me musically, but experiences I have inspire my compositions. There are just times or moments in my life where I have experiences that I want to capture through song. I think it’s a mixture of self-expression and meditation and a way to connect with people, because I feel when I am in a musical space, listening to or performing music, that’s where I feel the most urgency and reason to be around humanity.

Where do you see yourself going?

There is always the dream of playing in big concert halls, but I have come to the reality that my happiness and direction doesn’t have one single end goal, except to get better, and to find every opportunity that I can to touch other people’s lives. I’m not trying to get rich, I’m just trying to be happy and make the world a slightly better place.

The “Harpist from the Hood” performs at BAMPFA’s “Full: Street Classical” event.

Edward Schocker's Thingamajigs organization is presenting an ambitious festival Oct. 1-4 at the Center for New Music