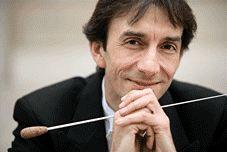 Bruno Ferrandis: Intensity and Beyond

When Bruno Ferrandis joined the Santa Rosa Symphony in the fall of 2006, the group gained a music director and conductor with worldwide experience conducting a wide range of productions. His resume includes his tenure as the conductor of the Juilliard Pre-College Orchestra and the Juilliard Opera Center and his role in cofounding the New Music ensemble ‘Music Mobile’ as well as the work he’s recorded with the Radio France Orchestra, but the list doesn’t stop there. It also includes conducting modern and classical ballet companies, opera companies, musical theater, and music to accompany cinema everywhere from his native France to Europe, Israel, Asia, Canada, and the U.S.

This year, he’s taking the Santa Rosa Symphony on its own world tour. Their latest offering, with music from Mozart, Berg, and Mahler and featuring soprano Christine Brandes, is just in time for Valentine’s Day weekend (Feb. 12-14). He spoke with us about his career and his enjoyment of his tenure in Santa Rosa.

What was the genesis of this program?

The overall inspiration for the season was to go all over the world. We began with Italy, then Balkans, France, and Mexico. After this is Germany and Russia. The idea was to inspire people to think of the place and the music that came from there.

Vienna was the nucleus of the best music brains on the planet: Mozart, Haydn. Beethoven went there. In French, it would be “le creuset,” the melting pot. Without the Second Viennese School, classical music would have gone in different directions.

It’s such a little city, a village, and it was such a gigantic evolution of music. I want to show the audience how a small place can have a Darwinian evolution. How do the pieces work together?

It’s a pretense to get the public to understand how music evolves. Mozart’s later work goes atonal and gets more dissonant. Mahler certainly was listening to that. It shows the evolution.

How to Build a Season

What brought you to Santa Rosa Symphony?

I got an invitation in 2005 from Jeffrey Kahane. I thought it went well. It was different being questioned about all the different aspects of being the music director. I became director in the 2006-2007 season, but it was a funny season as I only did about half the season. It was more of ‘a baton being passed on to you.’ The 2007–2008 season was when I really conducted a full season.

What do you most enjoy about it?

I like being the regular conductor. I know the personnel and the personalities, which you don’t know when you’re guest conducting.

What has surprised you about this position?

The intensity of what it is. In America, you have to know the music, the score, and the material. You have to plan ahead for a year to a year-and-a-half. You have to raise money, speak in public, give talks, relate to board members, work with the outreach programs.

I admire the system. You get to know almost everyone in the community and it’s very personal. In Europe, the audience is anonymous. Conductors have it very easy. They only do the music. One of these days it will change. The economy crisis means that the arts are not supported. You have to work at it.

Artists in Europe are not prepared for this. Here, it’s good you get feedback. You get broad feedback in Europe from other musicians, but you don’t get feedback from the general community. It’s great. I’ve grown up so much, from being the isolated artist. I can face any situation.

Where would you like to see the program heading?

We’re trying to show the symphony is not isolated. It belongs to the world today and encompasses the rest of the arts: dance, opera, film. It can be very dangerous. You have to be careful to show the link between art and cinema, not just entertainment. Some people doing film composing are just doing assignments. Some people work as artists.

I’m working on getting good fresh ideas. I’m also hoping to get a composer in residence for the symphony.

Santa Rosa is the third oldest orchestra in California. It began in 1928. It’s an incredible artistic community. The musicians come from all over to audition — Fresno, Eureka. I think that as a group, with what I’m doing, they are “not bored.” Musicians are very daring and adventurous people. I’m trying to create that in the programming.

How often are you here?

We lived in the Haight in San Francisco for about a year and a half. But my wife is a theater professional and so we’ve moved back to France as the French theater is different and she can find work. I probably spend between 65 and 80 days in Santa Rosa. It’s a good balance. I try to care for my family and have a full life. It’s a privilege to be in both Northern California and Paris.

What led you to conducting?

My brother is a flutist and my sister a pianist. We were brought to music by force. We had piano every Thursday. I hated my teacher. But little by little I learned piano and discovered I had a good ear. I enrolled in classes in harmony and counterpoint and had access to conducting classes. It was very theoretical. At around age 18 or 19 I began to conduct almost as a hobby. I was encouraged to enroll in the Guildhall School of Music and Drama in England. You have to audition, and I was one of the three taken out of the 50 people auditioning. The English are the opposite of the French. You learn by experience; it’s very pragmatic. You learn to do, not to think. I auditioned at the Curtis Institute in Philadelphia and at Juilliard and won the audition at Juilliard. I began conducting regularly.

What if you hadn’t been a conductor?

I would have been a pianist, maybe a vocal coach or a double bass player. I would have been in music. I regret not to have taken more time to study composition. My fate is to be interested in composers, especially new composers, maybe as a replacement for the fact that I’m not a composer.

I tend not to listen on the iPod. I attend live performances, though I’m going to miss some good ones this February in Paris. I’m planning to hear Martin Matalon’s new work on Monday.