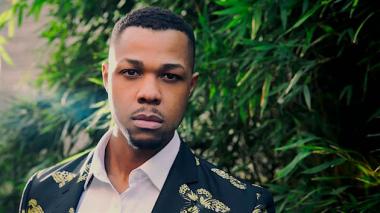 Arriving at his San Francisco Opera debut as Ned Peters, the stagecoach driver in the premiere production of John Adams’s and Peter Sellars’s Girls of the Golden West, 30-year-old bass-baritone Davóne Tines has taken a quick and curious route to get there, even by 21st-century standards.

Raised in Virginia and recruited early on by the choir of the Baptist church his family attended, Tines got an undergraduate degree in sociology at Harvard, where he also acquired an interest in arts administration. It wasn’t until he experienced the tedium of business school applications that he decided to commit instead to music study. Tines completed an advanced degree at Juilliard and was then quickly cast in roles in Europe, where he’s since performed in a wide variety of operatic and symphonic contexts. His engagements in the U.S. have included genre-bending productions for which he’s served as creator, performer, and administrator. “Davóne has a big heart,” testifies his Girls cast mate Ryan McKinny, “and he’s always interested in how we as artists can make a social impact.” Of Tines’s voice, fellow baritone McKinny testifies that, “Davóne possesses a rolling, warm sound that very much connects to what he is as a person.” Those qualities also enhanced SFCV’s conversations with Tines, in-person between rehearsals and by phone afterwards.

You’ve had only a short break from your last singing job, with the American Repertory Theater’s Crossing, at the Brooklyn Academy of Music. Please tell us about that opera.

It’s by Matt Aucoin, who was a freshman when I was a senior at Harvard. It’s about Walt Whitman, during the Civil War.

What do you sing? The “Body Electric”?

[Laughs] No, I sing Freddie Stowers, an escaped slave, who’s based on a real person and is very much related to my character in Girls of the Golden West. Because Ned, the stagecoach driver, has left the southeast of America and ended up in California, where he’s known as being a virtuoso of hustling.

Does he work for Wells Fargo?

No, he’s for-hire. The first Uber driver! [Laughs] We meet Ned because Dame Shirley, who’s the most present character in the opera, asks me to help her get to the town of Rich Bar. She’s kind of my ward, and I think there’s some romantic intrigue between Shirley and Ned, without regard to Fayette, who’s her husband and is there throughout the entire opera, even though he’s a super[numerary]. He’s a white man, and very much a foil for things that happen later.

No, Dame Shirley is actually a white character, but [soprano] Julia Bullock, who plays her, is half-black and half-white, and I think Julia’s actual racial identity will be played with in the context of this show.

Would you tell us more about Ned’s story?

The audience will notice that he’s the best-dressed character, to show that he’s a worldly person and has fought his way across the entire country, and in doing so has had a very broad experience of the world. His most fantastic outfit is his final one, in Act II, where his final aria is based on Frederick Douglass’s speech, "What to the slave is the Fourth of July?" He’s wearing tails and a cravat and this incredible vest, which is a piece of tied silk. The speech is a critical American document, with presence in our current times. John [Adams] is allowing it to have more life in our current American consciousness. In the style of the show and of how John and Peter [Sellars] work together, Ned is saying Douglass’s words as if they were Ned’s. Ned gets to become Douglass, as a natural evolution of his character.

Let’s also talk about the evolution of your career. Back in church as a kid, did you see yourself becoming a singer?

My grandfather was a church choir director, but I never thought of myself as a soloist. I played violin and piano, and did that in school, but every weekend was in the choir. Singing didn’t seem like something special, something you could do for a job.

What happened to get you to the S.F. Opera?

It slowly became the path of least resistance. I played violin for 14 years, I was in the Harvard-Radcliffe Orchestra, but I was more interested in the administrative side, I became the orchestra’s general manager and president.

Had you sung in high school, in Virginia?

I took classes. And my choral teacher started putting me in musicals, and I got the lead every year. We did Les Miz, I was Javert, we did Kiss Me Kate, I was Petruchio, and we did Ragtime, in which I was Coalhouse Walker. That’s a show I want to do again; he’s a strong male character, you get to know him and care about what he cares about.

Coalhouse faced serious barriers in his musical and personal career, because he was black. Were there barriers at Harvard?

Just as much as there are in any part of the world. I never felt I was aggressed upon. But I studied sociology, and I was hyper-aware of social dynamics in groups of people. I had friends from everywhere in the world, from every race. Problems arose, as in any community, but they were beautifully dealt with, in an intellectually rigorous way. I was at the beginning of the Millennial Generation, if you think about it. My school invented Facebook, we were about connecting and seeing people.

And you were proving yourself as an administrator, as well as a musician, with the school orchestra.

I also sang with the Dunster House Opera, and was vice president of the Harvard-Radcliffe Collegium Musicum. I had more fun doing the extra-curriculars than the actual curriculars, but it had always been that way, since middle school. My first opera wasn’t until my senior year: I did Stravinsky’s Rake’s Progress, I was Nick Shadow, coached by Matt Aucoin.

Tell me more about what got you to Juilliard.

After Harvard, I wanted to find a job and didn’t, and then I got an internship at the American Repertory Theater in Cambridge, because I’d met Randy Weiner, the husband of Diane Paulus [ART director], at dinner; he’d noticed my plaid pants and said, “You’re really good at presenting yourself!” I became the administrative director of their second space, which I dubbed Club Oberon, because the first show installed there was The Donkey Show, which is A Midsummer Night’s Dream with disco music. Then my mother passed away in a car accident, and I had to move home, at the end of 2009.

I started to write grants for the Piedmont Symphony Orchestra, which I’d played with in high school, and instead of just paying me, they put me on the board, a young black guy fresh out of college, with a bunch of older white people. That started a train of doing freelance arts administration work, all the while taking voice lessons from Patricia Miller at George Mason University, and singing a church job at the National Shrine, in D.C. One thing I did know was that I could do that job, meaning, I could sing in pitch, do the dynamics, and make sounds that conductors were happy with. I also worked for Adventures of the Mind, an educational non-profit that brings youth from disadvantaged areas who have potential to meet with academic mentors and athletes. That led to some really fun situations, like performing with a string quartet in the middle of Montana, and doing a demonstration of parabolic motion and rhythm in a stadium, singing Bach, just me and one cellist.

Let’s not lose track of Juilliard.

I remember sitting in a Starbucks, looking at business school applications online, and realizing it was completely wrong, nothing I was passionate about. So I thought I’d try for the best music schools, and if that didn’t work, I’d figure something else out. I applied to Yale, because it’s free, and I got rejected for the second time (I also was rejected for undergrad). But I got into Juilliard. I graduated Juilliard in 2013, and for my first job, I flew to Spain and did Puccini’s La fanciulla del West, with Maestro [Lorin] Maazel and the Sinfónica de Galicia.

How did you feel about Fanciulla, which comes to a lot of people’s minds when they see the title of Adams’s and Sellars’s new opera?

It’s one of the most beautiful scores there is. I think Puccini really does go all out in how he orchestrates it. There are some gorgeous moments, with Minnie’s aria in particular, where the orchestra reaches an expansiveness that captures America. But yes, there are also tropey things that have to do with era and translation, and Europeans trying to represent an American mindset, which make it funny.

You’ve had previous experience with both John and Peter, including working with Peter in non-Adams works.

Yeah, in pieces by both Stravinsky and [Kaija] Saariaho. We did her Only the Sound Remains, and it was more in Peter’s stylized directorial way, very ceremonial.

Did Peter get into choreographic details?

Oh my god, in the extreme! I joked that Peter was turning me into a dancer.

And is Girls anything akin to working with John and Peter in El Niño?

That was a perfect primer, I guess, for this project. John conducted those performances, and it was a crash-course in Adams.

Girls, more than Fanciulla, seems like it will show an evolved social consciousness, which will fit your own. You were in San Francisco previously to do The Music of Resistance, in a San Francisco Symphony SoundBox concert.

Right, with Christian Reif. In the first part of the concert, I sang two songs from Shostakovich’s Symphony No. 14, and it was wonderful to delve into his way of dealing with resistance, and in the same evening to clearly connect that to the American civil rights movement, with songs of Caroline Shaw. I got to know her because of Peter [Sellars]; I performed her songs at the Ojai festival.

I’ve heard that you want to do more multimedia projects dealing with themes of oppression, including police brutality, and how to stand against it. Obviously your career doesn’t fit the shape of a square hole or a standard curriculum vitae, but has the plasticity to fit your passions.

I’m still trying to figure out how to more clearly tell the story of my work. I'm actively engaged with every project I'm making and am in, and I see them all as part of a larger trajectory, to reveal some current truths, whether those are in the realm of social justice or just about life as a human being.

A daylong symposium explores the violent, tangled tales that inspired Girls of the Golden West.