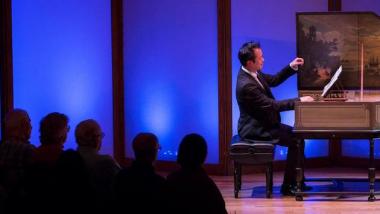 When conductor and historical keyboardist Derek Tam discovered early music, there was no turning back. Now totally immersed in it, he conducts several groups in the Bay Area, performs on the harpsichord and fortepiano, and has just taken on the role of executive director for the San Francisco Early Music Society (SFEMS), one of the oldest and most highly respected early music centers in the country.

Tam, 29, is first generation Chinese-American and grew up in San Francisco. He began playing piano at age 6, and with plans to become either a lawyer or a journalist, he attended Yale with a double major of political science and music. But halfway through his senior year he had an epiphany: He discovered that he really loved music and wanted to pursue it professionally. Without any real plan, he returned to San Francisco and began freelancing. Now, eight years later, he’s still going strong.

We chatted recently by telephone about his musical and personal journey, and what he hopes to accomplish in his new position.

What attracted you to early music?

It was in college that I discovered early music and historically-informed performance. My initial foray was into the music of the Baroque — 17th and 18th centuries. They thought in terms of emotion, and how you can convey that emotion to the audience, and really delineated gestures in the music — if a line goes up a certain way or has a certain rhythmic pattern; it’s like speech.

Delving into historically-informed performance also really made that music come alive for me. It wasn’t just about technique, but technique married with intelligence. I really appreciated how everyone had a spirit of collaboration, and that’s why I think getting involved in early music was a major factor in my decision to try to be a musician, and to explore our humanity through the lens of music.

The more deeply you get into it, the more you get to experience the lives of these people — people with the same passions and concerns we have today. And when I thought of the music that way, it seemed like music that was really made for the 21st century.

How did your appointment as executive director of the San Francisco Early Music Society come about?

When I was growing up, I was completely unaware of the richness of the early music here in the Bay Area, but after I moved back, I found myself attending a lot of events hosted by the Society. One of the most prominent is the biennial Berkeley Festival & Exhibition, which alternates [every other year] with the Boston Festival. These are the two major early music festivals in North America. To be able to attend those events and see the cream of the crop of local, national, and international audiences was such an inspiration.

I was on the artistic-planning committee for the Berkeley Festival in 2020 when I heard that the job was open. I really wanted to make the Society’s mission and values more accessible to the next generation of early-music lovers, people around my age, and that’s why I decided to throw my hat in the ring. The Society also promotes community musicians and community building, and I was really inspired and heartened by the community that had grown up around the Society.

What do you think you bring to the table, and what do you hope to accomplish there?

I think what I bring to the table is having a strong grounding both as a performing professional and someone with a lot of administrative experience. Over the years I have had the chance to interact with the Society in so many different ways — as a performer, as a teacher, and as a community member. My hope and my goals are to use the Society’s long history and resources to create and foster the next generation of early music lovers. I want to be able to continue or to extend the Society’s mission to bring the nation’s and the world’s best performers of early music here, so audiences can really experience this music at its most profound and effective.

And we’re not just presenting concerts, we’re creating educational opportunities for musicians of all levels and ages and are also trying to incubate and help fledgling groups develop as well, organizationally as well as musically.

What is coming up for the 2020 Berkeley Festival & Exhibition?

We are looking at a slate of nationally and internationally renowned artists as well as local favorites who are on par with any ensemble in Europe or the rest of the states. It’s a destination festival — people fly in for it. We have about 800 years of music to cover, so it’s daunting to fill in all the artistic slots through fundraising to support this magical endeavor.

It was really important to the board that I really maintain an active performing career, and I am very grateful for that. They see that as an asset, so I am able to straddle both sides. Going forward, I will be looking at ways to recalibrate to be able to hold both performing and administrative roles with integrity and with the best of my ability. It’s very different, and so far I am enjoying the challenge.

Tell me about the affiliation between SFEMS and the California Jazz Conservatory.

It is one of our collaborations, a concert series that we do at the California Jazz Conservatory, that we hope is a different take on presenting early music. We try to keep the concerts informal, and there is food and drink. It is very intimate — the audience is really close to the performers. It is meant to be a different experience to give people who may not know much about early music an easier way to connect within it.

We have been partnering with a lot of different organizations in the Bay Area to broaden our reach, and we’re seeing those and future collaborations as opportunities to think outside the box and to do early music a little differently.

What do early music and jazz have in common?

Jazz and early music are long-lost siblings. Both forms have a high degree of improvisation and invite risk taking, a lot of collaboration, and trading off of material. Doing it at the jazz school really gives us the opportunity to have people connect those dots. Every time I step on stage, depending on what type of music I am doing, there’s a lot of room for improvisation and being inspired, spur of the moment.

What are your future plans for SFEMS?

I just want to make it a little more visible. I would love to see the organization as being on the forefront of cultivating an early music audience in the country. It’s really a community, and I want us to be right in the forefront of building that community and bringing and developing those artists.

The other thing I will be looking at in the next couple of years is expanding our workshop selections so they are accessible to people of all socioeconomic backgrounds. I’m hoping I can bring my perspective as a first-generation Chinese-American, and get a mix of people who love this music, and reflect more of the diversity here in the Bay Area, so the early music becomes part of the heritage here.

What are your personal goals?

I would love to be able to be performing and administrating at the highest level of artistic integrity I can. If I can get to the core of the music as much as I can, that’s the best gift that I can offer people.

Elevate Ensemble and the Return of the Harpsichord

Harpsichordist Derek Tam joined the group in three pieces all composed in 2016.